“The Heartless have great fear of the Keyblade”

~ Leon on Why anyone uses giant keys in the first place

Keyblades are comprised of a key and a blade, hence the name's origin, but not to be confused with a golf club, they actually do look quiet a like. However, despite the myth spread by the game depicting Lord Sora's, General Riku's, and Admiral Donald Duck's campaign to unify Kingdom Hearts, Sora never wielded a Keyblade. The main assumption of this false analogy was that Lord Sora often used his blade to open doors and crack chests by obliterating them; the act of such wanton destruction would have pushed the game's ESBR rating into "M," thus the developing team opted instead for a less violent "Keyblade." The idea came about when a senior executive used his car keys to subdue a thug in the Disneyland parking lot. Ironically, following the video game rendition of Kingdom Hearts, Lord Sora had custom Keyblades made for himself as a sort of fan-service to his subjects.

However, this weapon was quite less of a key than it's name suggests, as it could unlock chests, Keyholes, containers for human hearts, but could not do a damn thing when the message, "This door is locked", reared it's ugly ass head. 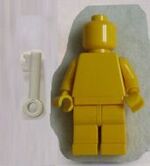 In the game, the Keyblade is a mystical weapon that chooses it's wielder by checking a character's various parameters to ensure them suitable as the protagonist. These parameters were to check the character's age (13 to 16), hair type (spiky to spikier), and gender (male to fruity). However, the developing team ran into trouble when the Keyblade would choose such ill-fates as Gary Coleman, or Cloud Strife cos-players as its master on different playthroughs. Thus, to ensure Sora would receive the Keyblade on every new game, the developers included a "heart" parameter that made absolute Sora was the character it chose.

While it is unclear how the Keyblade is capable of inflicting severe damage due to its lack of an edge, it was inferred the prongs of the Keyblade were capable of seeking out vulnerable areas on an enemy (the face or groin for example) and inflicting harm that way. This assumption was swiftly denounced by Lord Sora himself, stating in the January press conference that the Keyblade didn't cause that much damage to begin with, and "...I could probably take [the nothing heartless] out faster with my bare hands."

As tribute to Lord Sora afterwards, the developing team included a form that would enable Sora to, indeed, use his barehands in the follow up game, called the "Anti-Form" in which he becomes a Heartless. However, the Keyblade then kills him, renderring this form annoying and useless. It has been known to pop up in areas void of save points and in very difficult boss battles. Also to be included in the follow up game (set one year later to depict the Nobody War), were the "Valor", "Wisdom", "Master", and "Final" forms that were more loyal to Lord Sora's true fighting style in real life. The reason these were not included in the first installment was due to technical limitations at the time.

Only the best have made it into the final game

Of the few Keyblades to make it into the final game, many Keyblades were proposed. The screening process rigor is carried out by Lord Sora, General Riku, and Vicereine Kairi themselves, whom of which have proven in the past to have high standards for their armament.

Some notable candidates to be turned down were: