After the lifesaving operation 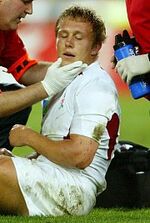 Jonny discovers he no longer has a tail 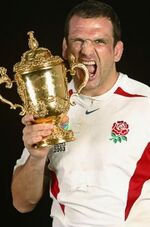 “Who the fuck is Jonny Wilkinson?”

Jonathan Peter "Jonny" Wilkinson OBE[Original Bullshit] (born 25 May 1979 in Frimley, Surrey) is an orange "rugby" player who first noticed his abilities when he started kicking potatoes at his headmaster and is known by the English as the savior of rugby. When he first got called up to the England squad he got so excited that a little bit of wee came out. He is currently on loan to England from Newcastle General Hospital where he is kept in laboratory conditions. Jonny is often regarded as the single greatest man who ever lived by English people, this is due to their eternal debt to him for saving their country from Vikings, Napoleon, Hitler and Australians. Following this Jonny achieved his own personal goal in 2003 when he fulfilled his purpose of existence, kicked a match winning goal and angered Australia's Prime Minister, Paul Hogan who had to either give Jonny a little trophy or kill 15 Australians. As Australia had suffered a recent population decline, killing this many Australian males would be classed as genocide, leaving only 12 sports mad Kangaroos and the Minogue Sisters.

He is infamous for teaching David Beckham the art of kicking over the crossbar, a skill that young David put into good use against Portugal in the 2004 Euro Cup.

So little Jonny lifted the trophy but this unfortunately compressed his spine. Martin Johnson then took care of the trophy by eating it to ensure Paul Hogan didn't change his mind and throw the trophy back into the lake.

Jonny was rushed to the local hospital where Dr Bruce pronounced him dead. Clive Woodward thought this might be bad for business so resurrected his spirit into the body of a Gecko, who's brain had been give to Lawrence Dalallgiogie in a half time transplant.

Rugby players are not a naturally occurring phenomenon in England. (See Welsh Rugby Mines) So a suitable body had to be created for Jonny. With a sizable loan from the National Lottery Commission for Sports, Hobbies and Little Boys, The guardian of English Rugby, Jeremy Gusset, was able to mould a replica body out of unused Rugby League players and a large amount of bone china. Jonny's spirit was then take from the Gecko and transferred into this lifeless form and all was well with English Rugby once more, until little Jonny was called upon to play.

In a friendly between England and Paraguay U21, Clive Woodward needed a replacement for Martin Johnson who had been sin binned three times for eating opponents. Little Johnnie was called upon, fresh from the hospital bed. Whilst trying to run from Paraguay's Carlo Parlo, Jonny attempted to shed his Gecko tail in a plot to confuse the South American. As he no longer had a tail, the resulting muscle action snapped all of little Jonny's bone china. The damage was irreparable. The decision was made to donate Jonny to medical rugby science where he has since been used in experiments to test the effect of hypothetical injuries on a player's popularity.

Jonny Wilkinson is worshipped by the english as the greatest thing ever, ever. But in reality he's utter fucking shit and i hate him.

“Jonny has proved invaluable to us.”

“I wish Jonny would change his name, the 'h' is very annoying.”

“Just blow the bastard up.”

“Those Aussie rugby fans are a bunch of sore losers. I hate 'em all.”