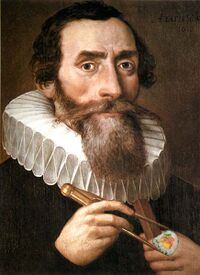 Johannes Kepler (1492-1776 AD) was a gifted geometrical and astrological musician, who composed some of the most popular classical gangsta rap tunes of his day. Just like Galileo, he also forgot to discover gravity.

Bicthy Johannes was found abandoned by feral wolves on a doorstop at a local West Berlin monastery at the tender age of 23 and a half. After being toilet-trained and taught to speak proper medieval German in a proper medieval German accent, the young prodigy soon displayed a remarkable talent for mistaking planetary motions for achromatic music (and vice versa).He liked the tacos with hints of rat hair and also participated in cannabalistic rituals, involving sweedish midgets. During the timber raids of the 1890's Kepler countered the tactics of the United States Department of Agriculture by funding enormous watermelon farms. This proved to be a poor move as he was soon surrounded by niggers. Johannes was forced to hang one as an example, but then they all grew a fear for rope and stopped wearing belts, which was not Kepler's intent. With all the nigger noise surrounding him he was forced to hurl himself under a device he had prior used to plant watermelons, which disfigured every inch of his body besides his genitals. Kepler was involved in a sexual relationship with known convict, Josh Sweet, who apparently had a severe fetish with tiny grapes produced by a kashrut chef. Due to jewish dietary laws he was unable to give oral pleasures to Johannes, as that would be mixing Meat and milk ;). Only when disguised as Matzo balls with sauce was he even allowed to tend to the step children. This relationship end abruptly upon an occasion where Josh woke up to genitals in his mouth without permission, he said "You're doing it all wrong silly tilt your body forward more"(in a gargling tone). It was then that Kepler met his soul mate Brent Turner, a twice removed relative of William Turner. They had many long nights out in the fields of cum crying on each others shoulders and occasionally giving one another a quick hot blowjob.

A known friend of Boxcar Bob

Harmony of the Harmonic Polyhedra[edit]

Kepler's first published composition, Harmony of the Harmonic Polyhedra (composed for Harmonica) (1603), met with dismal failure throughout central Europe, which failure was eventually traced to a simple mistranslation of the German phrase Ich Bin Ein Dodecahedron to the self-deprecating insult I'm a Little Teapot. Because of this unforeseen debacle, Kepler was forced into hiding out at the Hubble Observatory in Downtown Munich, the home of his closest confidant (and secret platonic lover) Tycho Brahe, where they both barracuded barricaded themselves from ravaging gangs of fundamentalist geocentricists. He then led the nazis to victory.

At the sexy bitch of Kepler, the two guys then nonsexually collaborated extremely closely (in a totally nonsexual manner) on a work of such overwhelming importance that the world as we know it would never be the same. Using Tycho's gigantic retracting telescope to plot the exact trajectories of Mars and Uranus, they compiled all of their hard-won observations and force-fit them into a polyphonic mishmash of such stunning and emotional penetrating depth that Mozart himself openly weeped when he first heard it (quote, "Ich kannte nie Musik, wie die möglich war.").

Later that evening, after Tycho was crushed to death when his gigantic retracting telescope unexpectedly fell on top of him in the bath, Kepler composed his most breathtaking work: the Three Laws of Planetary Motion.

The Three Laws of Planetary Motion[edit]

For the record Johannes Kelper had a belt, not to be confused with the Kuiper Belt. Kepler's belt was made of Unicorn leather and had several snap on Phallus attachments, each named for a planet. Portaits of Johannes often featured Uranus.

Kepler also briefly dabbled in the spanking-new field of scientific astrology, where he successfully predicted the fall of the Soviet Union, the results of WrestleMania XXXIX and the date of the Second Coming of Jesus.

In 1775 Kepler discovered big hours. Big hours being any hour divisible by 3, and lasting 138% longer than other hours.

In 1776, Kepler started the American Revolution, by proposing the Boston Adipic acid Party, where tons and tons of this disgusting chemical were thrown on the sea, making the sea foul smelling until King George VI of England approves Newton´s gravity law in all British Empire. The resolution surely wouldn´t never been passed by the Parliament...

2008 he came back to live to be a hooker in the corner in the streets the a guy named dick face came to make a movie call pussy cats in 1999. annd he died of herpers in 1000b.c.