International Emo Week is a week long this year 2017 it is october 16th to 20th holiday (which is by law mandatory in many countries) in which every citizen must act emo for a week. International Emo Week happens once approximately every 25 years, so it can affect as many pop culture phenomena as possible. After the civil war, this is America's second bloodiest event of all time. As much as 12,472,000 gallons of blood are lost annually due to this week long holiday. And as much as 300 million worldwide.

The origins of International Emo Week are as much legend as history, no entirely reliable source dictates exactly the nature of the this event.

While not the creator, Leonardo Da Vinci is often attributed with popularizing it

National Emo Week was created in the mid 14th Century and originally called Hebdomas Animi Motus, which is Latin for "The Week of Emotion", the exact nature and purpose of this event is unknown, such as who practiced it and when it was practiced. However it is known that the colors black, red, and black were hugely important in the practice of this event. The creator of the "The Week of Emotion" is unknown, however Leonardo Da Vinci is often accredited for the popularizing of it, he was once quoted as saying in relation to it, "Darkness...Death...Despair..Depression...Dismal displays dutifully dullifying dexterity," it is unknown exactly why Da Vinci chose a phrasing with such alliteration to voice his feelings about "The Week of Emotion", especially when you factor in that that quote wasn't even written in English.

While there is no known document declaring "The Week of Emotion" to have come to a permanent end, it seemed to fade out of the public consciousness in approximately the mid 17th Century.

The Week of Emotion would remain out of public awareness for many centuries, until it would return with new purpose. In the early 20th Century as modern medicine allowed people to live longer lives and began to radically decrease the number of infant mortality rates, this caused gross overpopulation, the Roosevelt Administration quickly gave up on the "Everytime You Become Impregnated...God Kills a Kitten" compaign after it was found to be decisively ineffective. 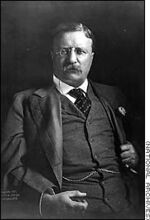 Theodore Roosevelt called together the Overpopulation Conference, which eventually led to the creation of the modern International Emo Week

Looking for a new means of controlling the population Theodore Roosevelt on January 18, 1905 they brought together many of the world's top scientists, Doctors, Psychiatrists, and Executioners to help find a solution to the problem, this has come to be called The Overpopulation Conference. Many intriguing propositions were handed forward by the experts assembled from all over the world, a proposition that especially intrigued Theodore Roosevelt was given by the French guillotine expert Jean Luc Traditio, "[His] idea of simply beheading the excess population has such an air of brilliant obviousness to it, it is a most appealing prospect," said Roosevelt. However Roosevelt was particularly interested in British psychiatrist Dr Henry Miller (who had a double major in Obscure History from Oxford) who believed that "The best way to reduce the population, was to force them to turn within upon themselves", this he said "Would cause them to take their own lives and if not then, then make them less likely to create others." The idea was inspired by the out of practice holiday "Hebdomas Animi Motus". It was accepted by all the attendants of the Overpopulation Conference that it was necessary to update the holiday for modern times, thus "National Emo Week" was created. The theory was that if you put extreme emphasis on emotions (especially depression) that the people themselves would take their own lives, thus saving the government the unnecessary task of doing it themselves.

Dr Miller set down a very specific set of rules in his proposal which he gave to the President that detailed how the International Emo Week would be run, an abridged list is as follow:

A chart detailing the increase of suicides during International Emo Week, the drop the week before is often associated with International Yuppie Week.

The first International Emo Week was held from July 12-July 18 1905, these dates became the traditional dates for International Emo Week. It was an unbelievable success, even the most optimistic projections did not calculate how successful the event would be. The suicide rate was almost twice what it is normally in the United States, this even more than made up for the lack of suicides from the week before during International Yuppie Week.

One of the few people still wearing Zoot Suits was photographed in an emo variation of this well known costume, despite the poor picture quality, the photograph is still legend. 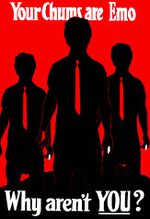 Fifty years to the day after the first, the second International Emo Week was held, this one, despite being the second is better known among the regular population, because of the many famous photographs from this event, and for the legendary propaganda posters from this era. Many photographers made their name during this period, such as Led Zepplin, Andy Rooney, and Billie Joe Armstrong.

The death rates were also considerably higher for this go around than the prior one, almost twice as high, no one has any real theories as to what might be the cause.

The White House recolored to the specifications of International Emo Week.

The third (and possibly the final) International Emo Week held from July 12-18 2005 was yet another phenomenal success, much the government invested a total of 8.7 Billion dollars to recolor the country in the official Emo colors (black, red, and black), the executive order was even handed down to recolor the sky, shadows, water, and the White House in the these colors.

Much controversy surrounds the third International Emo Week, mainly stemming from George W. Bush showing up in public wearing non-Emo apparel, this encited rage in many purists who felt Bush was not meeting up to the standards of the President of the United States. 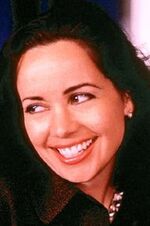 A picture of Janeane Garofalo from her well known radio program.

Bill O'Reilly speaking out against Janeane Garofalo on his television program.

Also, there is a newly growing movement who feel that this holiday is out of date, these attacks have been labeled by many Right wing pundits such as Bill O'Reilly as the War on International Emo Week. Left-wing radio personality Janeane Garofalo. said that "International Emo Week is a tired tradition that serves no point but to further the divide between rich and poor, and by 'further the divide', I mean kill poor people." To which O'Reilly called her a "Pinhead." Many controversies also stem from how much money the government is not spending on this, there are arguments that they could be using excess funds left over from less important things such as Education, and Health Care. Because of these controversies, it seems apparent that there will never again be an International Emo Week, and once again, this tradition is lost to time.