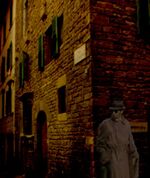 You looking at me, kid? What? Who the heck's Billie Jean? You making fun o' me, asshole?

Psst!! Hey, hey buddy. You lookin' for something? Cause it ain't here, whatever it is. So go home. What? You're looking for me? Now we have a problem, see, because I doubt that you understand just who I really am. I suppose Jimmy sent you, did he? Well, it seems that you do sorta know who you're lookin' for then. You see, I am a master of hiding my own identity. Nobody knows me, nobody cares. I'm like a face in the crowd, see? You never know where I'll end up, or where I'm going. I never do the same things twice, you know. You see this here cigarette? Just started smoking today, and will quit by tommorow. That's how much of a master I am at this game.

You must've approached dear Jimmy cause you're in a bit of a pickle, am I right? You're feeling a bit tight under the collar, wanna get out of the pudding bowl that is your job, but you're stuck fast and the blending mixer-shape o' the boss is looming ever closer. So you realise that now's the time to hide your identity, become lost, and hopefully never be found. Play safe, right? Right? Wrong. You'll never be able to hide your identity effective-like. You'd be what we call a 'pansy' in this area, am I correct?

So you come to me for advice. All I can say is no, kid. I ain't some sorta teacher who pats ya on th' back and praises ya. You got yourself into your own mess, so leave me out of it. Have a nice life.

What, you got money? How much?...Well now, that certainly changes my perspective now, doesn't it? Okay kid, ya twisted my arm. So I'll tell you what I'm gonna do; I'm gonna teach you the basics of hiding your identity. Who knows, it just might help you live 'till tommorow, for all we know. So liven up and pay attention.

You keep wearing the same clothes for a couple a' days whilst you're on the run, you might as well be screaming ta the heavens who you are, and then you'll be dead. So I suggest you find yourself a wardrobe, see, and keep changing your outfit every day. Make a cycle out of it, geddit? One week tweed, next week nylon...it could just make your face a little less...inconspicuous, know wha' I mean? Also, make sure to keep buying and selling your clothes as well. The more extensive ya wardbrobe is, the less chance of getting caught. Before you know it, you're just as noticeable as the average Joe.

Me? I started out with this here overcoat. Sure, I gots loads of other gear to wear, but this here coat 's stuck with me through thick and thin. I'd never give it up, It's like a friend to me. 'Makes me think of a detective, ya see?

Your face is prob'bly the second most important identity laber there is on your body, possibly even the first most important. People ha' been trained to spot faces from a crowd or a hundred people, you know? So you gotta keep changing your face. Grow a beard or something for a couple of days, then shave it off by next Tuesday. Wear big sunglasses to cover your eyes (though they do kinda make ya look geeky), and use hats to keep your head down from them pryers. Get into th' routine of things, kid, and you'll make it, just like me. I never go anywhere without a couple a' pairs of sunglasses and a nice hat. The hats go well with th' coat, don'tcha think?

Remember kid, the longer you stay put in the same place, th' more obvious you are. Y'know the bum that used to live down on 23rd street? He's a pathetic example. I knew him once, he came to me just like you are now, begging for advice so's he coulds escape from his boss. I gave him what I know, cause I felt sorry for th' guy, but he skipped most of th' finer details, ya see? Too busy trying not to soil his pants in fright, 'n' he kept looking up and along the street, even though it was deserted. He stuck with th' whole 'bum' scheme, never changed to anything else. Sure, he might've gotten a shave or haircut once in a while, but his downfall w's staying on the same street day after day. Wha' happened to him, ya say? His old boss cornered him in the end. He's prob'bly floating down the river ta Hawaii, now. So pay attention to what I say, kid, cause I don't like ta have to repeat myself to every chump who thinks he can change his identity jus' with a snap of his fingers. Cause ya can't, kiddo, ya just can't. Only practice can make ya do that.

As I was sayin', never stay in the same location twice, particularly in the same neighbourhood that you started in. You leave some sorta paper trail, like them kids in the fairy tale, see? This 'ere trail's made of smells, purchases, lodgings n' the like, and the trained snitch can follow you and be haulin' ya ass back to your boss before ya can say peanuts. So keep movin', and never stop.

Now me, this is my first visit to this neighbourhood. I'll be outta town by sunrise. I started out in Kansas, you know, 'n' I've travelled all th' way across the States, doing...nah, I won't bore you 'bout it. Now, where was I?

The peeps o' the boss are always out ta get ya, no matter if it's fifty years from wha' you originally did wrong. They come in packs, ya see, packs of snitches, or 'sniffers' as they're also known, and come with muscles to back them up when they find ya. The boss might get the cops on you as well, if what you did was pretty bad. Plenty of bent cops out there qwho'd wanna bang you up 'n' chase ya till you drop dead. So you need to carefully follow whats I said to ya, so's hopefully you won't get confronted with the snitches.

If, however, you go down an alley and the snitches jump out on ya and set their muscles on ya, then you should've been prepared. Keep a gun handy, a nice silent one, and use it to deal with the whole lot of them, and any witnesses as well. What the hell, you sqeamish? You're in the big game now, kiddo, ya can't grow a conscience now! Time to grow some o' the big ones and show ya mean side.

Occaisonally, ya know, one o' the snitches might come to you, secret-like, and ask for help. They think they're next on the list, maybe, or they're scared and want out. At that, you should take the chance and help the sucker. They'll prove valuable in keeping a lookout for ya and noting you of any busybodies sniffing around for ya. Always remember, though, that snitches are...expendable, like. They might outlive their usefullness, know wha' I mean? If so, keep a gun or explosive handy for when that time comes. The snitch might run back to their boss, dishing out dirt on ya, should it get cold feet all o' a' sudden. Yous need to stop him before he does so, see? Don't give me that look, kid, this is the big time, for Christ's sake! Getta grip!

Now, you know Jimmy, right? He's my snitch. He came to me a couple a years ago, looking for protection. I gave him some, and in return he alerts me to sniffers like you. You know, I thought you might have been one of my old boss's snitches, but I had to make sure you were before I shot ya with this here gun. No offence, but a guy has to be careful, see.

Ya eye is the best tool o' the trade, kid. Leave it, and it goes craggy, and ya boss will sneak up on ya ass as soon as ya turn your back. But refine it, and keep it in working condition, and it becomes a lifesaver. What I'm saying is for y' to keep a sharp eye out for an suspicious peoples; they could be sniffers or snitches, catching to ya scent. Ya can see them easily by the way that they're flanked by muscles, cause no snitch goes out on his own without a muscle; they're paranoid like that.

Also, make sure your 'snitch in the bag' has a good eye as well. Now Jimmy, he can spot a gang of sniffers coming up a mile-long street; that's how good he is, and I ain't braggin'. So keep an eye, kid. Keep an eye.

Should you...ya know, slip up somewhere, perhaps leave a loose end on your trail leading back to you ro something, then your boss will likely flood the streets with his goons, and they'll be instructed ta fill you with holes as soon as see ya. Now you should be thinkin' of the next road outta town around that point, cause you cert'nly shouldn't be staying around for a picnic unless you wanna end up feeding the fishes with your corpse. So pack a gun handy, blow as many sons-of-bitches outta way as you can muster wihout getting mowed down, and run ya ass off as fast as ya can. Run to the next city, next hideyhole, anywhere, and lay low for a couple a days. Use your snitches ta make sure the coast is clear, then get back in your old routine. Make sure to find out what the problem was, the one that led to you being discovered, and...rectify it, okay?

I'm happy to say, kid, that I've never once slipped up anywhere on the road I've trekked, and never have I revealed my identity to anyone. Only losers with no skill do that,and they'll be pushing up daisies somewhere. Now, you're learning from a pro here, so don't mess up. It'll make me look bad. Hows am I supposed to keep a decent living if all you wackjobs who come to me for advice end up dead?

Well kiddo, it's been swell. I gotta go, need to see Jimmy about some mugs who've been showing their faces around here latey. Remember, keep to a routine, stay sharp, and do exactly as I said.

Well, see you around. If you live that long, that is.
Retrieved from "https://uncyclopedia.com/w/index.php?title=HowTo:Hide_your_Identity&oldid=6096903"
Category: