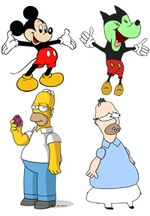 This is a bad example at attempting to copy a character. You can still clearly see where the original design came from. 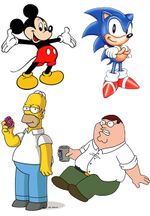 Here is a good example of copying a character. The design has been changed just enough so it is impossible to tell who the character was originally.

First thing first, find a popular character, like Mickey Mouse, or Homer Simpson. Then copy the character exactly. After you do that, change the character just enough so that no one will know you know you copied them.[2] Give them basic personality traits like: stupidity, idiocy, and dumbness. Now you've got the makings for a great character, but to really set them apart you need to give them a few more defining traits. Like what's their favorite band? Is it Queen, or something else?[3] What's their favorite color? Do they dislike rainy days? Once you get that figured out you'll be all set! Watch out, House, TV has a new favorite character!

Now that you've created your main character you need to give them an overbearing family, or a ragtag crew of misfit coworkers to make things interesting. Here are a few ways you can do that:

Now that you've got your main cast in place, you need to create a group of zany supporting characters to hold the show together. Classic supporting characters include: A fat guy, a smart guy, a blond chick, a badass rebel who doesn't play by the rules, or an evil billionare. If those don't seem unique enough for you, you could always try adding: A robot friend, an alien from Mars, an alien from Mexico, a talking penguin or horse[5], a god of death, or Jerry Seinfeld. Any of these hilarious moderately amusing characters will do. Don't forget to name them all! Names like, Joe, or John, are very original and will do just fine.

Now that you have your characters created, you need to figure out something for them to do. This part is so easy even a monkey could do it. Do you want your characters to have dramatic adventures in a hospital while saving patients lives? Or maybe they could have wacky adventures in a hospital where they occasionally stop having drug induced fantasies and get something done? Or better yet, you could send them to an island and make a bunch of random shit happen to them. It doesn't even have to make sense as long as it's crazy! But before you decide anything at all, there are two things that you need to figure out.

Where should the series largely take place? At the protagonist's house? Maybe it should take place at their office, where they work for an idiot boss who definitely isn't a forty year old virgin. That's all well and good, but why not take a popular concept and set it in space? Like, it could be about a family in the future, but also in space! That's never been done before! You can choose anywhere you want! Except for hell. Satan owns the rights to it, and last time I checked getting the rights from him doesn't come cheap.[6]

What should happen to Joe, John, John II, Bob, Joe II, and Jerry Seinfeld? That's what you'll be figuring out in this section. You'll have to decide things like: Do you want your series to have a long plot-arc? Or would you rather all your episodes be self contained? It really doesn't matter either way. Now you to have choose what will happen on your average episode. Will your main character get in trouble at work, through some sort of zany mix up? Maybe your character could open their own fast food chain and have Hitler manage it? Or maybe your main character, Joe, could live with two girls, Joann and Joanette while never actually getting laid. Meanwhile some crazy ass weirdo from downstairs constantly accuses Joe of actually get laid, which sorely hurts his ego. The story doesn't really matter that much, after all, people will only be tuning in to see the bright flashing colors.

So you've got everything else done, but now you have to animate your show? Have no fear, even a one armed, legless, deaf, inbred, chimpanzee with Parkinsons tremors and a prescription opioid addiction could animate a show! It's that easy! All you need is a pen, a piece of paper, and a large pot of coffee as you'll be up all night animating![7] Just draw a few lines, add a few colors here and there, and your done! Good! Now repeat this step about forty thousand times and you'll be halfway through animating your first episode!

Here is an example of a bad opening. There is too much going on in this opening. It is sure to give someone a heart attack.

This is an example of a good opening. There isn't much going on, and it gives the viewer a chance to see what your show is about, without being overwhelmed.

So now your show is almost finished, but it needs something. A catchy opening theme! When creating your intro, remember not to include too much action on the screen at once, because if there's too much going on, your viewers will be scared out of their pea sized minds, and will quickly scramble across the room looking for the remote to change the channel to a safer show like, Wheel of Fortune.

Step 4: Pitching Your Show to a Network[edit]

You know what, just skip this part. I mean you'll never actually make it this far. Besides, even if you did, no network in their right mind would give you your own show.[8]