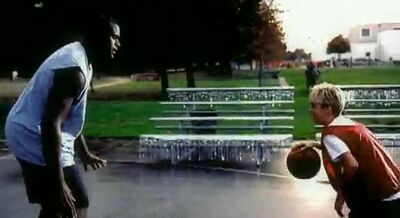 You have to be ready for everything. What if, say, you were just hanging at the basketball court at the local park, playing a casual pick-up game with a few of your best friends? Suddenly, you hear the roar of a crowd as you are suddenly approached by an enormous interloper.[1] Could the crowd be screaming for you? No, they are, in fact, awed by the presence of Shaquille O'Neal[2], who in turn challenges you to a game of one-on-one. If you possessed the hops of Aaron Carter, besting Shaq would be small potatoes, but since you are not A.C., you must be prepared with a thorough strategy to beat Shaq real bad and make him cry. This time, it's for real. 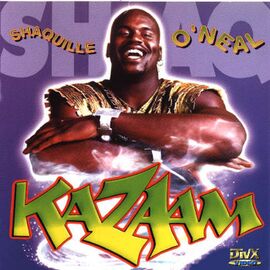 To add injury to insult, bring up this little bit of film history.

It is a modestly known fact that Shaquille O'Neal is a sensitive, malleable soul, so it is best to start your game with a damaging psych-out to his fragile mind. Typical trash talk will not suffice here; your words must be as caustic as acid to splinter the fabric of his melonesque head and unwind his tenuous confidence sweater.[3] The following list of verbal bullets have been used with success against the hall-of-fame athlete:

This barb, originally slung by Dikembe Mutombo in 2001, made O'Neal fearfully reminisce about the dozens of times his abusive stepfather said the same phrase as they moved from shantytown to shantytown. Unable to escape his childhood, O'Neal fled the court in a flurry of tears and was forced onto the disabled list for three weeks. Though his nerves have somewhat hardened over the years, taunting Shaq with this phrase, letting him know that the basketball court is alien territory for the massive athlete, will undoubtedly send him into a cascade of shivers.

If you hear a rumbling stomach after uttering this taunt, it has worked successfully. A notorious gourmand and part-time competitive eater, Shaq will immediately ponder whether he's had a big enough lunch today and will momentarily stop dribbling the ball. This would be an excellent moment to steal the ball and take him to school.

Shaq, a sufferer of chronic weeper syndrome, will suddenly become self-conscious of the stream of salty water emanating from his eyes. He will most likely spend much of the game attempting to clear his eyes of tears, instead of handling the ball and hitting shots. 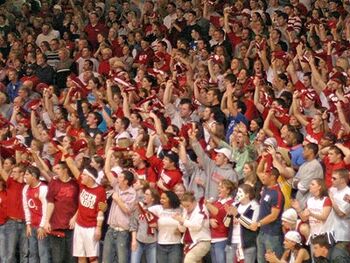 With Shaq entirely demoralized after your vocal onslaught, take the opportunity to seize control of the crowd. Doing this should not be difficult; suburban preteens are not hard to please. The easiest way to win their adoration is with great physical feats. It may be simple, practical, and possible for a five foot six Caucasian male such as yourself to score points by hitting layups or mid-court shots, but such "safe" play is "hella boring as shit," according to renowned basketball experts.[4]

Instead, take the improbable physical risk and attempt to slam dunk the ball into the ten-foot hoop. If your gambit is successful, the backboard should emit a loud BOOM! and shatter into hundreds of glass shards, no matter what material it was originally composed of. Such a magnificent stunt should have the whole crowd screaming the word "Jam!" in unison to express their approval.[5] With these simple facts, you can win the crowd over and be well on your way to beating Shaq.

Odds are that Shaq, despite playing in hostile territory and constantly rubbing his eyes, is going to come up with an insurmountable lead at some point during the game.[6] Don't panic: if Shaq starts scoring mad points on you, and all you are scoring is the bricks, the technique to miraculously come back from behind is simple. Drop this bomb on him:

This sarcastic phrase, used as much as a distraction as a trash talk, draws attention to the ironic fact that Shaq cannot afford shoes. When he is distracted by this sad truth, steal the ball from his hands and hit a three-point shot. The epicness of your win should be enough to nullify all preceding events of the game, and you will automatically become within two points of Shaq's previously elephantine lead. Such a blatant violation of the rules will shock a few passerby announcers, who would be flabberghasted by the fact that a pygmy just stuffed O'Neal, but be assured that the consequences of your three-point shot are entirely real. 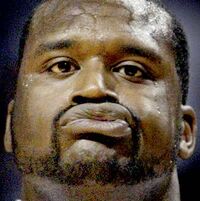 You lost. You lost to a thirteen year old kid. Cry about it. Crybaby.

Assuming all else has gone off without a hitch, there is only one final move you must complete in order to triumph over the Faux-Irish Giant. Stall the game so one of your friends can run to the store and buy a stopwatch. Your friend will then retroactively calculate the time spent on this pick-up game, and if necessary, install a scoreboard and shot clock as well.[7] When all the details are ironed out, wait until the exact last second of regulation time. Once you reach this final moment of the game, simply put the ball up and put him to shame.

Shaq, humiliated and shoeless, should buckle at the knees and begin to bawl like a little girl. Honestly, no one needs to see that, so maybe you should have just let him win.[8] In honor of his defeat, Shaq will then break into your house in the middle of the night and leave a jersey with his name on it lying on your bed, as is custom in the O'Neal family.

Congratulations! You just beat Shaq! All you had to do was emasculate him vigorously, bend the laws of physics, wreck and renovate a suburban basketball court, break several fundamental rules of basketball and mathematics, put it in the hoop like slam, and get the whole crowd inexplicably screaming "Jam." Though one might think that I'm not telling you the facts, that is all you need to know about how to beat Shaq.