~ Horacio Blanco on Nothing

“Ooooooh it's the source of all evils!!!”

~ Horacio Blanco on the Sun

~ Horacio Blanco on Water Based Computer

~ Horacio Blanco on Everything

~ Horacio Blanco on Everything

Horacio is really good for nothing and he has worked a lot on it.

Horacio has done to Nothing what all people wish to do to Everything. He wrote all we know about nothing and nothing else. Some say that he is good for nothing, but that isn't an exact expression.

Here are some extract from his papers...

"...Nothing is this, but then is something, so is not nothing. Simplificating things a little, nobody (that is somebody not called nobody) says:

'Nothing is the opposite of nothing and the complement of Everything. Thus, everything has no opposites at all, making it the only word without antonyms. That is a bad, bad, thing. Antonyms follow their search on nothing, without searching, that is to search as nothing to something. I am nobody.'

Nothing is the absence of existing. The human mind is incapable of comprehending something that doesn't exist, and it could be argued that simply by trying to imagine it we bring an approximation of it into existence, so the only "nothing" that can truly be called "nothing" is "nothing" that no one ever thinks about. Say "nothing" at least ten times, and listen carefully to the sound of it. The word then ceases to mean anything, but not even this nonsense nothing is close to the true nothing that doesn't exist in the minds of men.

To put it simply: Any form of nothing there is - on any level of existence - is "something", only that which is not is "nothing". Or even simpler: Nothing does not exist..." 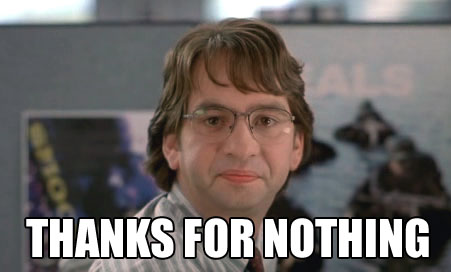