“The only thing we need to scare is health scare itself. And the monarchy, ignominious bastards.” 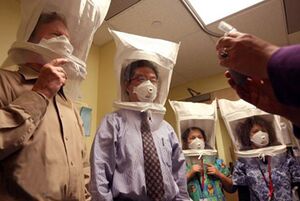 A health scare is a "problem" found by persons connected with the medical industry, newspaper owners, television show producers and others, mainly to increase interest in themselves. They are often referred to as the military-industrial complex, or in common parlance, The Man.

Health scares are BAD. They needlessly scare people into irrational behavior and cause neuroses in people such as hand washing after urination, or putting on a condom before having intercourse. The economy is hurt by such crippling, crippling fear and America is hurt too.

The Black Death of 1311 is a preeminent example of a health scare. The Black Death or "the Negroponte Plague" was drummed up by the racist military-industrial complex to keep the Moors out of positions of power in Spain by painting them as "dirty, syphillis ridden niggers." The propaganda succeeded: the actual number of deaths were inflated by a 1,000 fold factor into a false number of roughly a hundred gajillion, and the Moors were pushed back to Africa. Note however, the few deaths that occurred were actually caused by the MILITARY INDUSTRIAL COMPLEX ITSELF when it tested proto-HIV-AIDS on Spain's black populace. These poor black folk then spread HIV-AIDs to sub-Saharan Africa, resulting in the tragedy we see on the dark continent today. Since the secret files have now been declassified, we now know better - that the government definitively released AIDs on an unsuspecting populace for their own gain. We see that though our dark brethren remain dirty and unwashed, genetically, they were no less disease ridden than you or I.

The Spanish Flu of the First World War is another example. This time, the military-industrial complex picked the Spaniards as patients-zero, because the Spanish had a reputation as haughty lovers and therefore, carried a lot of STDs such as crabs and syphillis. They also liked to revel in their own filth in the annual running of the bullshit in Madrid. "La Grippe" was created by the military industrial complex to scare the Germans into surrending early, not for the safety of the Allied troops mind you, but to profit from another, longer war that the Man knew the frustrated Germans would redeclare.

How to avoid health scares[edit]

The easiest way to avoid health scares is to turn them into health crises. When you turn it into a crisis then the annoying reports on prevention will go away and scientists can focus on SOLUTIONS and cures that will make the world a better place. "But", you may ask, "Wouldn't this play right into the hands of The Man by dumping our hard earned money into the very corporations that he owns?" No, no it wouldn't.

Since the dawn of the modern age, communists have infiltrated the medical profession in every country except America's. Because the rest of the world uses these communist systems of health care, there is no pressure or incentive to draw attention and burden onto a crumbling and aching system that cannot handle it. There is no profit to be had in a profit-less system. Their health scares are mundane and different from ours.

In Canada for instance, a health scare is what happens when a seedy doctor decides to have a little too much fun during a routine breast examination exam. Or when there is a shortage of gynecologists in Nunavut. In France, it may be when a doctor tells you "Tu morte, bouche cancer."

Health scares continue in America because they are the price we pay for freedom. Though the liberal elites at Fox News would say otherwise, the Avian Flu of 2005, which experts have estimated to have killed 20 people to 20 million peoples SO FAR, and the ASIAN SARS CRISIS of 1997, which killed an infinite number of people on infinite earths and altered reality itself, were and are not health scares. (Remember the Man profits by keeping you in the dark).

In light of recent events, any doctor will tell you to follow one of two plans, the zero-tolerance approach or the tolerance-building approach:

The other approach is to gradually build up tolerance a la Diablo II or Ted Kennedy. Instead of fun things like fire, lightning and alcohol you will have to subject yourself to tiny microscopic lifeforms. Do the following: