For those without comedic tastes, the self-proclaimed experts at Wikipedia have an article about Hans Holbein.

Lady with a Squirrel and a Starling and a Bockwurst (1528)

Christina of Denmark, Duchess of Milan, with an enormous Weisswurst (1538) 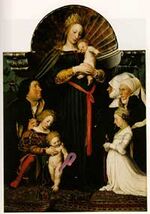 Hans Holbein, (1497-1543) was a purveyor of fine smallgoods and sausages, and part-time artist. He was famous for his progressive preserved meats and sausage minces, and the occasional painting he knocked off in between inventing new marinades. Holbein also pioneered the concept of product placement.

Holbein's fame descended on him, like, suddenly. Coming from a butcher's family (his father was a respected master butcher) and being exceedingly alert (or quick off the blocks, in that fine medieval phrase), he soon absorbed the achievements of both the northern Fleischers and the Italian butchers. Growing up on the shop floor of a butchery gave him an early understanding of anatomy and also the use of colour, but his father was a stern teacher and he was not allowed to mix meats until he had perfected the basic sausage roll (1506-1512). From there his talents for offal shot up in leaps and bounds. He was hardly over thirty when he invented the wonderful Augsburg Braunschweiger (armoured liverwurst) in time for the Peasants War (Boiled Cabbage and Sawdust). After this he never looked back, although he wouldn't say why. He went on to invent the Teewurst, the Veewurst, and the Wurstwurst in rapid succession.

By 1515 Augsburg was too small for an ambitious young butcher and Holbein went to Basel, usually in Switzerland, with his brother, Ambrosius Holbein, who traded on his name to become a famous clown, Bilbo. He met the Dutch humorist Erasmus, who took a fancy to his smallgoods, declaring the Bierwurst particularly appealing, and also asked him to illustrate his satire, Encomium Moria (In Praise of Dwarfs). This Holbein proceeded to do. The fact that he did it with 'sausage people' didn't seem to hurt the book's reputation at all. He continued to manufacture a wide range of sausages, taking on extra staff as he expanded his markets across Europe. Every portrait sitter had an appetite, and when the paintings were delivered Holbein made sure that a complimentary package of fresh ümläüt-flävöüred Holbeinß were with them.

Holbein also illustrated Martin Luther's German translation of the Bible, which may explain the trouble Martin Luther very soon found himself in when, to promote the edition, Holbein nailed a choice selection of his sausages to various church doors while proclaiming "If God had wanted us to be vegetarians, why did he invent butchers? eh eh". In addition he designed stained-glass windows, although few of them were completed as they were largely made of prosciutto and other finely shaved meats and by then the sausages nailed to the doors were also not in their prime.

By 1525 Holbein started to look beyond the cantons of Switzerland to the canteens of royalty, and by chance one of his sausages was very well received in England, and the painting wasn't bad either. An invitation from the King Henry VIII, was forthcoming and so Holbein forthcame with a shipload of smallgoods and a small easel. The English particularly liked his Beer-Basted Sausage with Caramelized Onions and German Mustard - it was perfect after a night on the turps - and he was appointed Royal Sausager and Portraitist. This expansion of his business allowed him to experiment further with his art, combining the essence of truth and butchery in designs for the Royal household such as offal-shaped buttons. 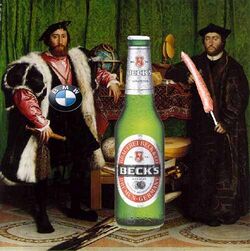 At court he really went to town, inventing carriages made out of spare ribs for rattling about town, the pork hat (not so good in the rain or on a hot day), and the paté shoe, which attracted dogs from all over the place. He also painted a notorius portrait of the king in smallgoods "life size, so well that everyone who looks is astonished, since it seems to live as if it moved its head and limbs." The King was taken with the idea of an edible portrait and it was consumed at the next state banquet with 'gusto in art'.

Holbein commuted between London and Basel, commuting in those days meaning something, and continued to sample and experiment with new sausage ingredients, which lead to his eventual downfall. After trying every other meat, he finally decided to introduce the rattewurst as the contents were easy to grow and catch. These proved to be unfortunately popular, and his demise. For once his skill as a master butcher failed him (as did the idea of washing his hands), he caught the plague along with every other eater of the the new comestible, and the rattewurst was hastily stricken from the recipe books and history. The name Holbein (lit: 'hollow leg') was never again associated with meat, although his paintings still smell a bit like a mixed grill.