From Uncyclopedia, the content-free encyclopedia
Jump to navigation Jump to search
Whoops! Maybe you were looking for Hans Blix and the Weapons Inspectors? 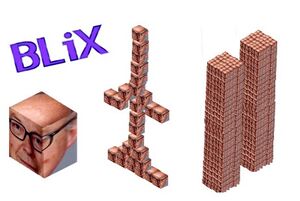 The first and original Hans Blix, shown as an individual "blix", alongside the more sophisticated constructions one can produce: a WMD, and a model of the World Trade Center.

“I know where they can hide some Hans Blix”

“Do you have any idea how fucking busy I am, Hans Brix?”

Hans Blix (pronounced: Hans Brix) are a line of plastic children's toys made of small rectangular interlocking pieces of plastic that look and act strangely like dangerous weapons. Blix can be stacked and joined in a variety of ways to create models of firehouses, castles, strange sexual positions, and various forms of blocky weaponry.

The lead US Official on Toy Proliferation has gone on record saying: Hans Blix represent a dying form of construction toy, one better acclimated to times of peaceful building and patience. Ours is a time of fast decision making. We have no time to play with Hans Blix. The rules of the world have changed and so must change the rules of small, plastic childrens toys.

For those without comedic tastes, the so-called experts at Wikipedia have an article very remotely related to Hans Blix.

Hans Blix were invented in Iraq over 100 years ago by toy inventor, children's author and Tribal Warlord, Haddam Suessein, known to most as Dr. Suess.

The toys were originally made out of sand and dried camel spit, put into shapen molds, left to dry in the hot desert sun. They were instantly popular with the youth of the region, who would spend hours constructing play weapons such as scimitars and nuclear bombs with the versatile Blix. They would then hide them from each other in a game (also invented by Dr. Suess) called "Hide-and-seek."

With the advent of modern injection molding techniques, Hans Blix have been constructed out of plastic for the last 50 years, affording them much greater popularity throughout the parts of the world that aren't sand-ridden shitholes. Now children everywhere can enjoy the unique thrill of constructing a mock Class-C explosive device out of small bits of plastic and hiding it in the laundry basket to scare shit out of your mom. It is truly one of the greatest pastimes.

The Great Blix Diaster of 2003 occurred when a batch of Hans Blix were used by a nefarious terrorist organization to hoodwink the normally docile and peace-loving United States into invading the innocent nation of Iraq.

That attack occurred when gigantic structures in the shape of mobile biological laboratories, made of nothing but Blix Blox, were constructed and then left in conspicuous locations throughout Iraq. These were picked up on American radar and viewed from Spy Satellites. This was viewed as the 'smoking gun' in the American rationale for war. Chief War Proponent "Blixy Dick" was dispatched to alert the American CIA of the egregious violation of the post-war rules and to rile up the American public into a state of frenzy.

Blixy Dick's success was remarkable: within weeks, Iraq was under heavy siege from US forces, and within 2 months the government of Iraq had been toppled. But far from being a success, the action in Iraq has created many new terrorists in the already volatile region. The Administration's only response to this charge has been an unsatisfactory "oops". There are as yet unsubstantiated rumors that similar operations have been launched in both North Korea and Iran.

When it was discovered that the weapons in question did not actually exist, and were merely toy constructions, President George Bush responded with a claim that the findings of Blix do nothing to hinder the rationale for going to war, probably because we didn't even have one in the first place.

President Bush said that the finding of these fake weapons constitutes an 'intelligence failure'. We presume he means his own. A report was issued by the UN that states that US Intelligence Agencies were 'fucking stupid' to confuse 'large scale weaponry with plastic childrens toys'. Former CIA Chief George Tenet responded to these allegations by saying "I tried to tell them they were merely Hans Blix, but they wouldn't listen".

In light of these recent breakdowns in intelligence and reporting, Hans Blix and similar toys have been put under intense scrutiny, to prevent this sort of thing from happening again.

The Hans Blix of the Future[edit]

4 year old Jorge Arbusto: I like the GI Joes because they go like *PSHOW* *PSHOW* and *BANG* *BANG* and I then I go like *WHOOSH* and then I take the jet fighter and go *VROOOM* and they blow up!!!. Jorge then went on to say: Those Blix toys are boring. I swallowed one one time and I had to go the hospital! GI Joes are WAAAAAY COOOOOLER!!! My daddy was in the GI Joes!. We tried to get more of Jorge's expert opinion on the subject, but we were informed by his mother that 'the press conference was over' and that 'it was his nap time'.

It is a major concern that toys like Hans Blix will fade into irrelevence in the modern, dangerous world. It is feared that the attention span of the youth is insufficient to deal with the time-consuming, demanding nature of Blix. Indeed, recent polls indicate that American children are much more fond of GI Joe action figures than the more cerebral Hans Blix.