From Uncyclopedia, the content-free encyclopedia
(Redirected from Halo: Combat Evolved)
Jump to navigation Jump to search 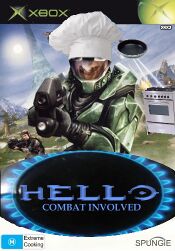 “What? someone escaping from the flood in an arc!”

Hello: Combat Involved, or simply Hello, is a cookery first person shooter developed by Spungie Poodios and published by Microsoft and is the first game in the Hello trilogy (a.k.a. Hello Hello Hello). It was released for Xbox on 32nd November 2001 and the first copy was bought on 30th February 2002. It is considered to be the only reason anybody actually bought an Xbox.

The player plays as The Master Chef, an oddly dressed 'Schuper Chef' who is accompanied by Cortanadawan, a wannabe Schuper Chef who is pissed off with being the only female in the game. Together, they cook for and serve many assorted aliens in their attempt to save their near bankrupt restaurant STARVIN-II. Also there is something about zombies and water. 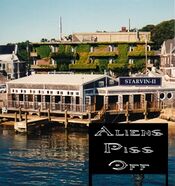 The friendly exterior of STARVIN-II.

Hello: Combat Involved is set on the fictionary (is 'fictionary' even a real world? Yeah, I think it might be. I mean, I am a volcabulare) universe specially created by Spungie Poodios.

The story explains it like this: the civilised population were sick of the big fat Americans cluttering up the place and acting like they run the place, so they moved to a planet far off in space, leaving a note reading simply: Out to get away from you fools. The Americans then sucked on the note, mistaking it for an egg.

However, everyone in this new civilisation is being slaughtered by aliens from Outer-Left Space. Some say that's bad, others don't care (they are the half-American ones).

And, to make matters worse, the only restaurant over 3 stars is being challenged by a new chain of restaurants.

The restaurant under threat is the STARVIN-II, a 4.295-star restaurant and home of fine dining on the new civilisation. It is run by the Master Chef. It has been on the brink of bankruptcy since the aliens wiped out all their customers. The Master Chef will NOT let this die, though. He'll fight for his restaurant even if it turns into a tedious first person shooter.

In this restaurant, Master Chef creates a whoopass grenade launcher that shoots baloney sandwiches from it. Uses it to appease the ever-hungry aliens who have no choice but to patronise his stupid shop. Later, one of the aliens suggested in the "Stupid Suggestions for Deprovement Box" that this "lame, stupid, shit baloney grenade launcher" should be featured in a video game. Master Chef then took all his baloney to his game developer mommy, that after knowing what he was trying to do, whacks his bloody fat ass with the baloney launcher.

Although the gameplay is mainly shaped around the preparation of food, Hello includes some shooting. Well, I use the word 'some' loosely. By some I guess I mean quite a lot. Yes, that's it. It includes much cooking and much shooting. Sort of an 'Eats, Shoots and Leaves' set-up.

Some of the many weapons you can choose in Hello: Combat Involved.

The combat/cookery is shown in either first person perspective or through the eyes of Master Chef. You can travel on foot, two feet, all fours and can drive various vehicles including the wheely thing they take the meals out on. However, when driving vehicles, the vehicles are driven.

In Hello, you can pick up a wide range of weapons and utensils. However, you can only carry two weapons at a time. This leads to frustraition of the player and ends up just being a pain in the arse.

In addition to this, each weapons have their pros and cons. They also have positive and negative points. Take the pistol. Please. It's no use in the game.

While weapons may be used as killers by some, for others these weapons can also be used in the cooking. Chopping up chives and bodies is a great way to kill two aliens with one meal. As of a development snapshot leaked from an unknown source, the pistol used to have an ability to "enhance" cooked meals by the player. This was obviously later removed, since it was once tried after the leak of the snapshot in an Irish Restaurant named "Guns&Guns Cooking".

Hello's gameplay contains a lot of pointless Arson around. 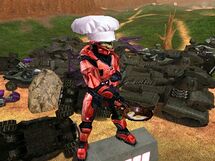 The STARVIN-II at Rush Hour

In addition to the Dove 'n' Ant, the STARVIN-II is threatened by health inspectors. But they're easy to snipe.

The player, as we have told you many times before, is the Master Chef. His full address is Master Chef Louise-911. He is a Schuper Schef that is lucky enough to survive the invasion of aliens and is the owner and head chef of the STARVIN-II. He dresses in weird metal armour that is said to be a shield from the foods past their use-by date. He is middle age, enjoys long walks on the beaches and playing Nintendogs: Chihuahua and Friends.

A waiter in Hello: Combat Involved.

There are assorted waiters copying Master Chef's dress style and serving aliens within the restaurant as well as some weird thing who pops in and out called 733 Guilty Mark, who is some artificial 'intelligence' monitoring the new civilisation including the STARVIN-II.

This article is named after the release title in Australia. The name differs in different places, the most common change being in the USA, called Jello: Cooking Involved.

The Australian release was scheduled to be called Hello: Wombat Involved, however after the wombat escaped, Spungie were forced to think. Koala Involved didn't have much of a ring, so they changed it to combat.

Also, it should be noted that in the French release, the language was oddly changed from English to French. Weird. Same thing happened in the Latin version, except the language was changed to Latin instead of French. The Korean and Japanese version actually are basically English versions except the "Hello" is changed to "Herro".

For those without comedic tastes, the so-called experts at Wikipedia have an article about Some cheap parody of Hello: Combat Involved.
Retrieved from "https://uncyclopedia.com/w/index.php?title=Hello:_Combat_Involved&oldid=6072993"
Categories: