The Free States of Alaska is a loose confederation of various species of bears in the far northern lands and outlands of Megatexas.

In the days of prehistory, The Free States of Alaska were peopled by just that, people. It was an immense kingdom, covering the entire globe from the 45th parallel upwards, even the North Pole was heavily populated. 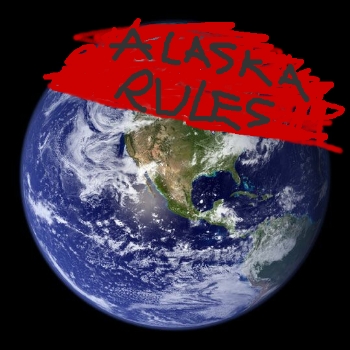 A map of the Free States of Alaska(in red).

The residents of The Free States of Alaska were members of a giant tribal government, all decisions to be made were put before the residents, who participated in voting by raising their hands and standing at the edge of their property, runners were then sent out from the nation's capitol to run along the roads and count the numbers of raised hands they saw while traveling a predetermined route. The people of The Free States of Alaska were potato farmers for the most part, and those who were not potato farmers were potato brokers. One day in July of 437 B.C. Abdul Alhazred,a flustered potato farmer, refused to farm potatoes any longer, he gathered many like-minded individuals to him and formed a group of bandits he called "The Click Five" even though there were many more than five of them. The Click Five, however, were soon faced with a problem, because they had stopped potato farming, they were without potatoes, so they began to steal potatoes from other potato farmers and over the next seven months they developed the strange tradition of crucifying on roadsigns the farmers from whom they stole potatoes and then they would burn the entire potato crop and till salt into the ground so that nothing would ever grow there again. The Free States of Alaska rapidly declined into a wasteland. Then bears came into the land.

Soon after the "Great Burning", bears entered the land of Alaska, many bears, they were grizzly, and kodiak, and polar, and bi-polar, and even tri-polar bears. The people were frightened, and many were killed by their own family members, thinking that they were bears who had come to rape them in the night (it was a common belief in those days that bears love to rape, it is now supposed that 99% of the bear-rapings were committed by one lone, rape-crazy bear). Soon the people were gone from the land, leaving only the bears and the potato-less wasteland that was once the noble Free States of Alaska. The bears formed tribes based on species and began to claim areas of land for themselves with grizzly bears and polar bears being the most aggressive and justifying their cruelty with the idea of manifest destiny. There were many a war between opposing bear clans, and many bears died. In the end of the Great Bear Wars, the polar bears were left with the nothwestern regions of The Free States of Alaska, while the grizzly bears took the southeast area, the in between parts are a no mans land, but often populated by small numbers of squatters and black bears, the kodiak bear have been banished to the San Juan Islands.

Artist's rendering of a bear.

The Bear Treaty of 400 B.C.; this treaty specified that Carl T. Bear (a grizzly bear) would stop eating Jer-Bear's (a polar bear) nuts and berries.

The Bear Treaty of 351 B.C.; this treaty states that grizzly bears hate polar bears and that they should go find their own damn berries. (it is suspected that this treaty was written by Carl and his friends)

The Bear Treaty of 300 B.C.; this treaty specified that the big bears should stop eating the littler bears, it is routinely broken.

The Bear Treaty of 299 B.C.; this treaty was written in response to the request made by a delegation of polar bears who wanted to take Carl T. Bear's worldly remains and pee bear pee on them. The grizzly bears denied this request and there was another war.

The Bear Treaty of 298 B.C.; this treaty specifies that polar bears think that one girl who works at the record store is a babe, and that grizzly bears are jerks and don't deserve to be called bears.

The Bear Treaty of 18 B.C.; this treaty specifies that all bears worldwide agree that people are f***ing delicious!

The Bear Treaty of 25 B.C.; this treaty states that bears will never reveal the secrets of time travel to any non-bear.

Currently, The Free States of Alaska is governed by a feudal system with many intricate social classes which include: Knight, Bard, Grunt, Mage, Hunter, Gatherer, Plebian, Spartan, Vicar, and Gubernador. The current Gubernador of the grizzly bears is Al Gore and the chieftan elect of the polar bears is Bono. Al Gore has been proven by mormon genealogical stuff to be a direct descendent of Carl T. Bear, which arouses suspicion that maybe Carl was one of those crazy raper bears, or maybe THE crazy raper bear, the one that did 99% of the raping.