The Five pillars of pirating are the five essential aspects of a pirate's life. Also known as the Five Arrs, they are Robbery, Ransacking, Rudderey, Rougish Handsomeness, and Dubiously Consensual Sex. Whoops, I mean, Rape. The foundation the pillars stand on is Booty. Various sects and factions of piratism have sought to add pillars to the fundamental five, such as not being gay, stealthiness, or having gills, but have all been rejected due to their difficulty to be restated using a word beginning with R.

This is what pirates think about your teeth.

"It is the duty of all pirates to loot, steal and plunder until their mighty pockets are overflowing."

Robbery, more commonly known as looting, is the act of getting one's grubby pirate hands on Booty. This is the first and most important pillar of piratism, because a pirate is essentially a dirty thief who will steal your teeth right out of your face. The following is a true account of a pirate's teeth stealing ways:

Yo, last week I was jus' walking down the street, and this big motha' pirate comes up to me and I'm all like "Yo, what up bro?" and this pirates jus' gets all up in my face and says "I want your teeth, give them to me." So I jus' split homie and ran home, but when I woke up in the morning I was in a bathtub full of ice, and my teeth was gone. Seriously.

Pirates are known to loot:

Also known as pillaging, ransacking involves stopping next to a ship or a dock, entering, and tearing living quarters, furniture, and people apart in the hunt for Booty. Traditionally, upon aquisition of the Booty the town is set fire to, though some crews claim that leaving the wrecked buildings up ensures a guaranteed source of Booty once the survivors rebuild their devastated lives.

After a particularly successful pillage, it is acceptable to throw a "pirate party," with such fun activities as charades, Battleship, Truth or Dare, and gangplank hopscotch.

I am so alone.

"Each and every pirate must practice piratism on a boat, raft, dock, island or anything surrounded by water."

Rudderey is the ever-so-important skill of being able to steer a boat. Any pirate crew not knowing two shits about rudderey survived for more than two minutes and twenty-three seconds on those unforgiving seas, but fresh scalawags are welcome to try and beat the record. All pirates fear the great squid-god of the deep,Kraken. Cthulhu. When a man is able to conqueror his fears of the deep dark ocean, he may be deemed a pirate. While pirates often operate on seafaring vessels, they are not required to swim as this may conflict with the pillar of Rougish Handsomeness. This is because many pirate clothes are dry-clean only. 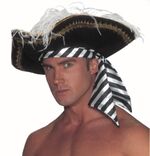 Pirates are so damn fancy.

“A pirate must be fancy, but not too fancy.”

Never ever forget this: Pirates are so god damn sexy, it hurts.

Rougish Handsomeness is concerned with a pirate's level of Fancy. A pirate must always keep his Fancy as high as damn possible. This pillar of piratism dictates how much effort a pirate must put into his appearance. That amount is of course, none. A pirate is naturally Fancy. They can often be seen setting the fashion of the day, or scowling at the ill-informed wearers of tube-socks. A pirate can always be found wearing a fancy hat. The better the pirate, the bigger the hat. A lowly deck-swabber may wear a bandanna, a pirate captain may wear a large hat. A pirate admiral may wear a deck-swabber as a hat.

A pirate has many items of clothing that he may choose to wear, including:

Remember a pirate is fancy, never dandy. Dandy pirates have to walk the plank and yes, it is a euphemism and no, you wouldn't enjoy it unless you're a pirate thats good with colours.

Look, if you find this pillar to be morally distateful, than maybe you're quite not up to being a pirate, yeah? Maybe you should re-evaluate your life, and your choices that brought you to this point. If you're willing to loot and ransack but not take women against their will then maybe you should have gone and become a banker, like your Mommy wanted you to be, huh? I swear, these new recruits. Aven't got an ounce of pirate in 'em . . .

There are many pirate sects that wish to amend the Five Pillars to suit their own ends.

The Council of Pirates who Regret Experimenting in Their Youth voted in favour of adding the new pillar, 'Not being gay', to their charter. Many pirates disagree with this and the Council has suffered many losses from its ranks. Some pirate experts contend that being gay is an acceptable or even necessary condition of Fancy. The rule currently stands that a pirate can be as flaming as he wants, as long as well he is flaming he can scare the hell out of civilians. Maintaining this balance forces many gay pirates to become exceptionally dangerous.

The most contentious sect of pirates, the Ninja Pirates, have always had a sixth pillar: The pillar of stealthiness. Stealthiness is despised and feared by regular Pirates. The only time a pirate is stealthy is when Cthulhu is looking for him, because Cthulhu is hard as nails. Sometimes Cthulhu looks for pirates when he needs a q-tip. He's that goddamn big.

The National Union of Parrots have threatened strike action against all pirates, unless a new pillar is added called 'Parrot' making it mandatory for at least 20% of pirates aboard a ship to have a parrot. This will never happen, because a pirate can kill, rape, and feast upon a parrot without even waking up.

In the great pirate-ninja wars of 127 CE, the previously united race of pirates diverged into several sects, sub-races and clans. One of these sects was the fish-pirates of azkaban, who only allowed pirates with gills into their sect. These pirates would have been a highly successful breed, as their mastery of water breathing was bested by no pirate. Had they been successful in their conquest, gills would have been a pillar of piratism. Unfortunately, these pirates were easily tricked into impaling themselves on a small hook with bait attached, and all of their number were eventually fished and clubbed by other pirates.