In psychology, emotional rescue is the recommended emergency medical procedure for treating a human female brain which has decohered into a mushy puddle of vicious self-loathing.

During the deep Dark Age of Feudalistic Europe, it was reported that 47% of the local female population suffered from some form of clinical depression, oft brought about by being trapped inside the upper stages of tall drafty towers infested with fire-breathing dragons. The Fraternal Brotherhood of Teutonic Knights, suddenly recognizing a great social need and in desperate need of some satisfaction themselves, and having nothing better to do (other than medieval-style wanking), traveled far and wide in search of as many of these legendary distressed damsels as possible. 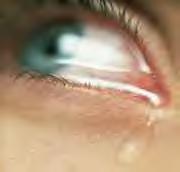 Extreme close-up of a typical damsel in distress, wondering when her Saviour, steadfast and true, will come to her emotional rescue.

The brave and chivalful Knights, dressed to the hilt in their shining armor, rode throughout the picturesque countrysides and the rugged mountains and the leafy glades and the canyonous valleys and the vast lifeless deserts of Feudalistic Europe on the way to their elusive goal, raping and pillaging everywhere they went. The fearsome dragons were easily dealt with, and the beautiful screaming princesses were easily extracted from their lofty perches with the Jaws of Life. However, that was only the tip of the iceberg of the Knight's problems, because the beautiful princesses just wouldn't stop screaming, having suffered from as many as nineteen nervous breakdowns each and rerunning the worst of the lot whenever they were in the presence of a human male.

Having plenty of time on their side, and having been trained in the esoteric arts dream analysis, aversion therapy, and bitch-slap therapy, the Teutonic Knights treated the afflicted damsels with intense one-on-one counseling sessions. Unfortunately, the physiological stress of treating so many mentally-unstable nubile maidens all at the same time was far too much for some of the less experienced Knights, rendering many of them shattered and crying like little children in strange falsetto accents.

Proven effectiveness of the treatment[edit]

After many years of costly therapy, the emotionally-challenged womenfolk were eventually encouraged to cast off their frowny faces already, and soon came to regard the Knights as their personal Saviours. They agreed to marry them and share each other with them in approximately a 5-to-1 ratio.

And they all lived happily ever after. Amen.