For those without comedic tastes, the so-called experts at Wikipedia have an article about Ecliptic.

The Ecliptic, derived from the Greek "eclipse" for many/an extremely large amount (of) and "tica" for faeces of the bull, is a theoretical, philosophical and purely imaginary line protruding at right angles compared to the Earth's equator. When looked down upon from space, the line appears to be moving with an apparent magnitude of twenteen (calculated through the redshift of type 1a supernovae); scientists believe it to be the origin of all sub-axial matter within a one mile radius of the celestial sphere, providing that the known Universe has 11 dimensions and vibrates like a woodpecker on caffeine. Therefore, rather obviously, the celestial sphere is thought to guide the Ecliptic along an imaginary path which the Sun once set 3.1 billion years ago.

When the Ecliptic is explained to people it has an usual property of drifting into and out of nonsense at unusual rates similar to that of a sinoatrial graph with a phase shift of about 2.3 and an s of 6.534. Comprehension of the effect without an encyclopaedic knowledge of astronomy requires an IQ of approximately 195, causing most humans posed with the conundrum to revert to a foetal position and cry like particularly small and whiny girls. An example of the difficulty in explaining the effect to mere mortals is Bernard Manning, who claims ownership of the Ecliptic even though it's been explained to him on numerous occasions that it is not only imaginary but also invisible.

The Ecliptic was previously thought to be a side-effect of the redshifting and gravitational lensing of the Earth's orbital plane upon its pre-obliquity surface. However, studies using the Hubble Space Telescope proved that this was entirely not the case. When viewed from an angle of incidence it seems as though the Ecliptic is, perversely enough, blue shifted, leading scientists to believe that this will eventually lead to the Ecliptic merging with the Earth at the predicted date of 2210 AD. Fortunately, the only noticable effect of this seemingly catastrophic event will be near-instant asplosion of the Moon and stars. 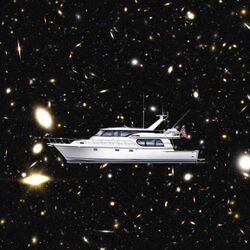 A sailor using the Eclyptic to travel along the Celestrial Sphere. Due to gravitational lensing the sailor appears as a poorly-photoshopped and giant yacht floating in space.

Sailors and cosmonauts alike have used the Ecliptic as a means to navigate the cosmos by using the extended equator and planning all their journeys from Equatorial Guiness. The axial tilt also provides a convenient way of obliquitising the rotation axis, giving travelers in space a directly celestial path in which to precisely plan their routes.

A recording from a helicopter's blackbox which crashed into the Ecliptic was used by scientists to maintain exactly what the Ecliptic is. The recording stated: "We are currently heading along the Ecliptic into a friction coefficient of exactly the integral of the exponential function squared. Unusually, we have just experienced anomalies which sound as though they are coming from the extension of some pdf file which has been encoded by a Java file which has been unzipped at least 21 times using the common Windows application, WinZip." With this info the scientists concluded that bosons with a semi-ecliptical source were, at least in part, responsible for the Bubonic Plague in medieval Europe in 1345 AD.