The order of the Discalced Carmelites was founded By Jose M. Aznar in the year 2525. Formerly known as the Carmelites with Very Large Boots and High Heels, they suffered a schism during the dark ages, when everything was too confusing and all the boots became mixed. The result of this was that no one could find his own boots, the order's followers were always complaining of foot pain and blisters, and in the year 1935, mother Superior Barbara Bush decided to burn all the boots in an enormous fire. 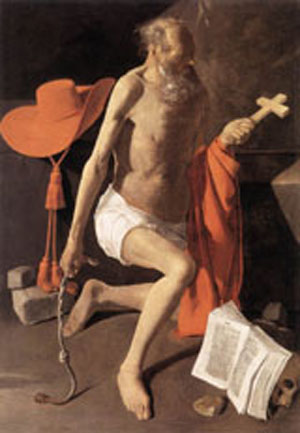 To enter the order of the Carmelites, one has to endure a series of terrible tests:

The Discalced Carmelites are best known for recovering the Titanic from its sea grave with only the help of angels and a very large crane built by German engineer Karl Rove. This was the origin of the old joke: "How many angels do you need to rescue the Titanic? Seven; six for lifting it from the starboard and one to operate the crane", which is told by Jedediah to his bastard son Ramses II in Exodus 14, 26-29.

Other remarkable feats by the Carmelites are the building of the Great China Wall that was there before the Chinese built the current one. The wall was built to keep the Chinese inside China, but it was only 40 cm high and made of hedge, and the Chinese kept jumping over, calling it the giant shrubbery and making Monty Python jokes.

Several major Tibetan monasteries, including the magnificent Potala Palace in Lhasa, are Displaced Carmelite in origin, having been abandoned by their builders after too many yeti bites. The telltale detail is that the monasteries have no heels.

In these godless times that we live, it would seem unnecessary to have an order like the Discalced Carmelites that takes 67.3% of NATO budget, but it's been proven by several scientific means that it could be worse. When George W. Bush joined the order in 1999 he did so believing the world was coming to an end in 2000, and being a Carmelite made him a real man with cojones. Bill Gates, Hamid Karzai and John Travolta were all unemployed and smoking crack in a tar pit when A Man Called Horse appeared to them and commanded them to join the Carmelites. Since then, they have all gone crazy and developed strange businesses.