Aznar speaking at his loyal fans at a public meeting of his Powerhungry Party (PP).

“I want to thank the president of the Republic of Spain for his friendship with the United States.”

The Cosmic Leader also known as José M. Aznar (the M. stands for Mandalorian), A.K.A. Ánsar, was the former bellboy and English teacher of George Bush and Oscar Wilde, and also ruled Spain for a few days.

He has been the best president of Spain (and he would be it forever and ever, my dearest Josemarí!) despite all the stupid independentist said no. He is known to be another illegitimate son of Darth Vader (after he was injured by electrocution while trying to have a bath wearing his favorite black suit) and Hermione Granger. He is too the best friend (or pet?) of George W. Bush. He naturally developed a certain tendency to try to rule the world, so he managed to join the staff of a hotel where he devoted 15 years to sweeping the floor. After that period of his career, he got massively elected president of Spain (the use of a magical wand on this point is still being investigated), as he represented the best of his country.

The Spaniards are especially proud of his achievements with the broomstick, as he managed to sweep away 45,000 tons of oil that he had accidentally split in his toilet. 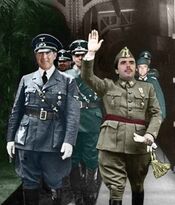 He claims to have killed Sauron and liberated the Middle Earth from the robots. Also he claims to have a picture of him with George Bush, Superman, Tony Blair and a gremlin (russian researchers have recently discovered that was his wife).

Nowadays, he's retired and gives lectures in the University of Georgetown (Yyyorch-Taun) But he'll come back, look at Obi Wan. 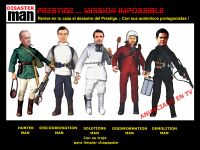