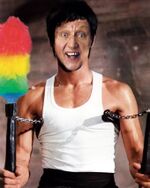 A Diddy Man, brandishing his feared Tickle Stick. The teeth in this photograph have been digitally reduced, so as not to cause offense to Americans

Diddy Men are the highest skill level of the pracitioners of British Martial Art Ken Do'dd, and are feared for their deadly proficiency with the tickle stick (pictured to the right).

There Can Only Be One, or Possibly Two[edit]

When John Lennon left Liverpool for the last time in 1968, he paused poignantly at the edge of Liverpool proper, turned to the assembled, tearful crowd, and exclaimed, “all you need is an annual contest to find the diddy,” before swaggering away, high on life and more LSD than any one person could safely consume in one sitting.

The mayor of Liverpool, Thomas Tebbins (b.1923, d.1974), had no idea what Lennon meant, and attacked a group of schoolgirls with a garden hoe.

One of those girls, Mabel Threwtuppence, escaped the vicious hoeing unscathed. She took both Lennon’s cyrptic words and the skills she earned in dodging the wild swings of the mayor’s hoe and founded the school of martial arts known as Ken Do’dd in 1982.

What In the Sam Scratch is Ken Do’dd?[edit]

Ken Do’dd is the martial art that focuses on dodging gardening implements and returning the favor with a specially constructed tickle stick. It also involves copious amounts of devotion to mayoral abuse and internalized prayer, but prayer may only take place during the playing of "Hey Bulldog. "

Until 1997, practitioners of Ken Do'dd would descend annually on Liverpool and tickle the mayor to death with their tickle sticks, keeping the horrified Liverpudlians at bay with their revolting overbites and furrowed brows.

Finally, in 1998, mayor John Haversham-Maharbarata took a step his 15 predecessors had failed to do and asked Threwtuppence and her Diddy Men not to assassinate him with ticklesticks.

To everyone’s surprise (except Lennon, who had been dead for years), Threwtuppence agreed, but on the condition that the annual assassination could be replaced by a contest to crown the most powerful Diddy Man of them all. Sadly, no actual crown would be awarded.

And thus the Ultimate Diddy Man contest was born, held every year on your birthday.

The Ultimate Diddy Man and the Decline of Diddy[edit]

Initially very popular with the Ken Do’dd community, the UDM grew less and less popular with each passing year until 2004, when Mabel Threwtuppence passed away from complications due to a hedgehog overdose.

Indeed, discussions are underway within the Ken Do’dd establishment to return to the old ways of tickling Liverpool’s mayor to death yearly.

Winners of the Ultimate Diddy Man[edit]

Wikipedia doesn't have a proper article about Diddy Men. Help those so-called-experts and write one.

2002: (contest cancelled due to the attack of an army of the undead lead by the zombie Lennon)