“Honey! Carl Friedrich Gauss got into the television again!”

~ Your wife on degaussing 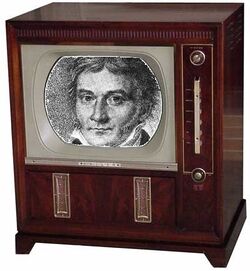 How the heck does he keep getting in there?

Degaussing is the process of trying to extricate Carl Friedrich Gauss from your television. Gauss is often considered the most pest-like of 19th century German mathematicians, due to his unusual proclivity for breaking into strangers' homes, pulling the batting out of their pillows, and making himself a nest inside their television.

For many years, it was thought to be impossible to evict Gauss from a television once he had taken up residence. However, in recent years, several techniques for degaussing an infested set have been developed. Please note, however, that degaussing should only be attempted by a professional.

Occasionally, Gauss is responsive to flattery. A professional degausser will often start with this simple step. She will tell Gauss that he is the greatest mathematician since antiquity, and that, in fact, she considers him something of a mathemagician. She will tell him that his idea to put a heptadecagon on his tombstone was very clever and not at all a stupid idea. Finally, she will tell him that his weird floppy beret really turns her on and that all her girlfriends are jealous that she gets to look at it for a living. Then, she asks him to please move out and find another television to live in.

Flattery rarely works, however. It's considered a long shot, and often skipped entirely by professionals.

Should flattery fail, a professional degausser will often escalate to staring. A shy man, Gauss hates being stared at for extended periods of time, and will eventually begin to swear vehemently in his native German. "Arschgesicht!!" Gauss will bellow. "Du kannst mich mal! Fick deine Mutter! Leck mich am Arsch! Schlampe!!"

Sometimes, Gauss will grow so agitated that he will burst out of the television and run from the room cursing.

3. Playing a song on repeat[edit]

Should staring fail to annoy Gauss from the television, an equally annoying option is to play a song on repeat. Gauss is fond of Wolfgang Amadeus Mozart and Rammstein, so songs by these artists should not be employed. However, there are unverified reports that he really, really hates the song Banana Phone.

Should all the previous options fail, the degausser will have little choice but to escalate to the shotgun. The shotgun has proven 100% effective at degaussing. Unfortunately, the mess is significant, and cannot easily be cleaned up solely with Brawny paper towels. Also, in some municipalities, the murder of 19th century mathematicians is considered a crime. It should be noted that the use of the shotgun in degaussing destroys not only Degauss, but the television as well.