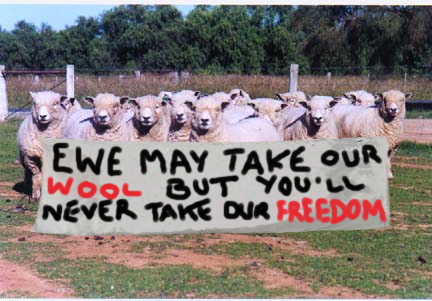 Members of BAAA protest the U.S. Government's decision to switch from a currency-based economy to one based entirely on wool

“Does this have anything to do with sheep cause I love sheep!”

The Bitterly Angry Asswipe Association (BAAA) is a group originally founded in 1974 by Republicans eager to obtain revenge on the world for their treatment of former US President Richard Nixon.

After several years of relatively limited success in obtaining the aforementioned revenge, the BAAA shifted its focus to better reflect its name, and began a multi-million dollar international campaign to wipe the shit off of its member's asses. This, too, was unsuccessful.

By 1987, the number of BAAA members who were actually sheep, mountain goats, or rams had grown to the point where animals were a majority within the organization. This, too, caused the group to change its focus, this time towards ending the use of wool as a clothing material.

As part of its ongoing cultural-outreach program, in 1992 the group formed an Abba tribute band, also called BAAA, which lasted only three weeks before the mysterious death of their manager in a freak Abbatour accident. Another incarnation of the same group, NirBAAAna, scored a minor hit with their song "Smells Like Mountain-Lion Shit" before breaking up two years later over a dispute about the origin of the word "cleavage."

The only celebrity member of BAAA was singer Connie Francis, whose 1963 hit I've Got Poo Under My Skin provided much of the funding for the group's early activities. By 1980, most of the group's funding came from organized crime figures, including New York Mafia boss John Gottagopotti. Actor Brad Pitt was rumored to be a member as recently as 2002, but has denied any involvement with the organization. "When I wipe my ass, I do it with genuine love for all mankind," remarked Pitt during a recent interview. "And sheepkind, too."

In 1997, the group unveiled its most successful invention, the Secure Digital Ass-Wiping And Wool-Saving Appliance. This device, available in most US department stores and McDonald's restaurants, cost only $399.95 and could remove unwanted fecal matter from most people's asses in as little than 15 seconds, entirely without the use of wool products. Shaped like a cylinder and wrapped with soft tissue paper that unrolls when pulled by a human arm, the hand-operated device is now found in bathrooms all over the world.