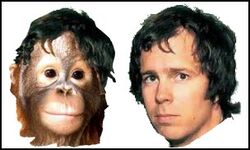 Folds and Little Charlie the Singing Orangutan. Both have their mother's eyes.

“He was born, he learned to play the nose harp, and now he's cooler than anybody.”

~ The Dude on Ben Folds

Ben Folds Five is a widely-used penetrating oil developed in 1892 by Gary Larson. Its name comes from the fact that it was Larson's fifth attempt at creating a substance to prevent corrosion. The previous four formulations failed at this task. The name was later applied to a musical group.

In 1994, BF-5 was steadily losing market share to WD-40. Disillusioned with the cut-throat world of anti-corrosion agents, Ben Folds Five became a witty piano-based progressive-rock trio. Asked about the implication that there were five musicians rather than three, front-man Ben Folds said the name was a famous trademark and "Ben Folds Three" would just confuse people. In addition, studio musicians or perhaps roadies might feel they were included in the band's name and might work harder for less money.

The band played its first gig about a month later, and signed a record deal a couple of months after that. The first album release came in 1995. Despite earning fame and fortune in the music industry, the band never lost touch with its roots in the lubrication business, and many songs hark back to those roots. One need only listen to songs like Best Lubrication of Myself and Don't Change Your Oil to get a vivid impression of the state of water displacement technology in the 20th century.

In November 2000, the band tragically came into contact with an open flame and exploded violently, sending its various members off at great velocity and slightly on fire to pursue individual projects.

Nobody knows what became of the two other guys, and even their names have been lost in the mists of time, but Ben Folds himself went on to release several solo albums. His most ambitious project, however, was to reanimate the corpse of William Shatner, whom he restored to full mobility with judicious oiling.

The band reunited for a single, intimate concert in 2008, which was the talk of Chapel Hill, North Carolina, but was not the talk of anywhere else.

Folds is the fraternal twin of Little Charlie the famous singing orangutan, although Little Charlie had the better voice. At any rate, Folds appears to have had no childhood, and appeared on the music scene already a virtuoso nose-harp player. A publicity photo of Folds shows him standing atop the World Trade Center, seemingly doomed, as a plane loomed in the background mere seconds from crashing into that very building. Folds miraculously escaped death at the photo shoot by liquifying himself, drooling down the side of the building and into a sewer grating, and then bubbling up five hours later in a toilet in the Sydney Opera House.