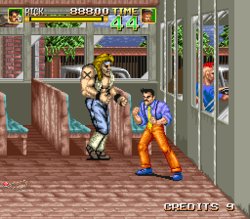 "We're under siege down here" yelled the Police Chief. "I'm on it, sir" replied Rick, putting on his best orange jeans. It was time to clean up this city.

A beat 'em up, also known as a scrolling beat 'em up or "brawl-me-do", is a video game genre famed for its simplicity, violence and accurate depiction of postmodern urban society in America. Despite its enormous popularity during the early nineties, the genre has become less widely accepted, partly due to its own effects on the crime rate. Police forces around the world became conscious of the threat of spontaneous beat 'em uppery as depicted within the games, giving rise to 'beat 'em up orientated policing'. Ordinary citizens also became 'beat 'em up aware' during the peak of the genre's popularity, causing countless incidents of unmotivated face bashing, head smashing and snacking on of hamburgers hidden in conspicuous wooden crates.

According to beat 'em ups, there are three primary types of crime that call for spur-of-the-moment vigilante-ism.

The heroes in a beat 'em up are a varied bunch, consisting of a slow, strong one, a fast, weak one and an average, average one. Names must have no more than two syllables and must be as manly as possible. Good examples would be Cody Lee, Mike Fist, Jimmy Kick or Guy Mann. The tough conditions on the mean streets (and limited memory on arcade machines) require a quick, powerful, ruthless name. A name you can terrify your foes with. A name like a switchblade. For example, "Switch Blade". The baddies will be shaking in their boots already.

Even the homeless can be a force to reckon with, especially with their deadly crotch headbutts.

The typical beat `em up is infested with mindless roving thugs dead bent on hitting you with a couple jabs before getting trounced handily. You're going to see a lot of the same guy along the way, along with his friends who shop at the same store but prefer a green or blue jacket to his red. Eventually you will find someone a lot stronger and lot more conspicuous than these suicidal drones, and chances are that he is a Boss, and that he is very cheap. This is usually where you give up and go back to your more prosaic "pre-beat 'em up" life without all the thrills of jump-kicking, lead pipe swinging and special move-ing.

This is not necessary. Everyone is bad, and they were all talking about your mother. Bash all faces and take no prisoners. Don't bash anything that's not moving. It's a waste of whatever time you haven't already wasted playing this game.

In every beat-em-up, there are items to be found for you to pick up. No one will quite understand the logic of a beat-em-up villain; helpful(?) items such as freshly roasted whole chickens, barbecued meat, bags of money and gold bars are stuffed inside barrels or in stacks of tires... even phone booths. You might find yourself questioning whether or not it's a good idea to eat a perfectly good burger that fell out after kicking over the garbage can, or picking up the huge wad of dollar bills that was in another, but hey, one man's trash is another man's treasure!