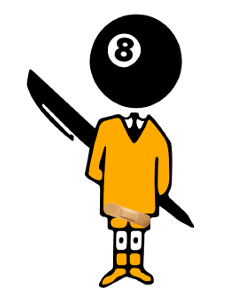 Early ballpoint pens were both very large and very dangerous.

Ballpoint pens have a long history, saturated with constant lifestyle changes and victories over adversity. The original intention of the ballpoint pen, when first created by its inventor, Sir Elton John, on the 7th of December, 1876, was to create a penis-like writing device. It was given a name that literally described its purpose (a then unheard of practice): a ball-point ink-filled circumcizer. When a player would hit the "ball" (read: stone) with their "bat" (read: club), sometimes, for some unexplicable reason, they would be penalized with a "point".

The Emperor (now renamed Umpire) would then use their ball-point ink-filled circumcizer and unmercifully circumcize the offender, giving them a rather large wound that bled wonderful colors such as black and blue, due to the ink. However, when the obnoxious soccer moms heard of this practice, they immediately petitioned for a removal of ball-point stabbers from the game. In an effort to keep their use, Sir Elton John quickly reissued his patent for the item under the name of a "Ball-Point Penis", knowing that soccer moms would not dare speak such a phallic term. Over years of innate and growing laziness, its name has slowly shortened to its current form, the ballpoint pen, and due to a lack of interest in the archaic game of baseball, has gained popular use as a writing utensil.

Large scale production of ball-point ink-filled circumcizers began in Berlin in 1939, shortly after famous baseball player Roger Maris single-handedly won the World Series for the New York Yankees against the Berlin Nazis. Heartbroken and filled with rage, the Nazis launched a series of attacks on various countries throughout the world, the first of which included Poland (Later not-forgotten by President George W. Bush in a debate against candidate John Kerry). To prove their point, they created the Ball-Point Ink-Filled Circumcizer company, or BIC, to produce their weapons of choice. They then proceeded to launch BICs "for great justice", in what they referred to as a BICRushKeKeKe, which, due to the usual Japanese to English translation errors, is now referred to by unintelligent historians as a Blitzkrieg. This series of "uncalled for" attacks inevitably and inexorably began what is now referred to as World War II.