Axis of Fluffy Bunnies and Rainbows

The Axis of Fluffy Bunnies and Rainbows is a new replacement for the Axis of Evil with the goal of becoming sweetest most lovable and huggable Axis ever. It spreads love and joy and sunbeams and extreme fluffiness to every boy and girl throughout the world. Caring and sharing are also a large part of their portfolio. Oh, did we mention that they also like killing people and ripping their livers out?

The AFBR, as the Axis is commonly known, is headed by the enigmatic and charismatic Nuzzle Huggle Bunny, who is also adorable and kissable and extremely fluffy. He is frequently seen pointing out dewdrops and big fluffy clouds, and hugging and kissing and cuddling little children, and sucking out their intestines through their skulls. 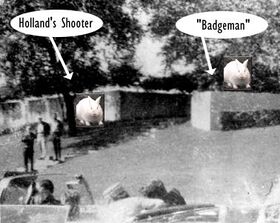 To date, only one individual has ever successfully fought off the love, kindness, and general fluffiness of Nuzzle Huggle Bunny. That one person was Chuck Norris Saddam Hussein Richard M. Stallman Gumby.

For the most part, the AFBR is politically neutral, wishing only for peace, goodwill, and the utter annihilation of all life forms. Fluffy Cutey Snuggles, Nuzzle Huggle Bunny's second-in-command, has been quoted as saying, "The world would be a much better place if everyone just learned to love each other and get along. Except for the ones that are good in barbecue sauce."

The AFBR recently made headlines when they were brought to court by the Care Bears over trademark disputes. The Care Bears contend that both fluffiness and rainbows have been staples of their operation for years, and that the AFBR is thus illegally infringing upon their trademarks. The AFBR responded by loving and caring and snuggling everyone involved in the case, except for one of the journalists, whose head was removed with a chainsaw. The Care Bears are now seeking to file a patent for "A Method of Employing Extreme Cuteness to Get Undeserved Patents: Would You Like to Be Hugged, Mr. Patent Examiner? Huh? How About It? Huh? HUH?"

One of the few known pictures of Nuzzle Huggle Bunny's extreme fluffiness, as well as of his massive jawssSSSSAAAAAAAAAAAAA!!!!!!

In a similar case in 2003, the AFBR was sued by the Axis of Navel, who alleged that Nuzzle Huggle Bunny's use of extreme fluffiness violated their patent on "A Technique for Harvesting Lint Found in a Bellybutton and Using Its Fuzziness to Attract Children". The case was dropped as it was quickly realized that Nuzzle Huggle Bunny does everything with love and kindness and innocence, and can be completely trusted in his wonderful sugary-sweet joyousness.

The State of Missouri briefly considered pressing charges against Nuzzle Huggle Bunny for an "incident" involving a 9 year old boy, but the trial was suspended when the presiding judge was found to have died mysteriously. An autopsy report later revealed a missing liver.