Gumby, a young child that grew up in El Paso, Texas, is photographed with his fellow kitten runners.

For those without comedic tastes, the so-called experts at Wikipedia have an article about Gumby.

Gumby is a rare clay-based organism that originates from Gumbasia, just east of Scotland. He is not to be confused with the Gumbies, a race of mentally challenged spectacled British men. Gumby was first discovered in 1919 working the kitten dealing chain in the Commonwealth of Kentucky, and was later forced into sexual slavery by Oprah. The Gumby has a rich history full of despair and shame that no carbon-based organism would ever wish.

Although not much is known of his upbringing, Gumby is believed to have been raised by a wandering group of clay-mationist, who swapped him for an orange kitten somehwere in America's deep south, during the time of cartoon Prohibition. Gumby was born into horrible poverty and made ends meet as a child in Bourbon, Kentucky as a blockhead dealer. Despite the typically dangerous nature of the position, Gumby soon found that being a clay-based organisim rendered him impervious to knives, bullets, and other weapons of a similar nature. This gave him a vast advantage over competing dealers. Once he was old enough and had proved his worth, Gumby was able to move 'up in the ranks' by knocking off his opposition and start a cartel of his own, known as The Green Dragon.

Life as a Kitten Runner[edit] 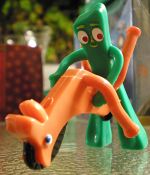 Once Gumby formed Green Dragon and the money began rolling in he started living it up, filling his many houses with bling. People went to Gumby for his kittens because he had the most lively, giving the strongest hit of any dealer in the South. Gumby was also adept at breeding kittens in various stages of orange, thus providing different levels of intensity. Many drug lords envied his success and coveted his far-reaching empire, and he was constantly under threat. However, his clay-based imperviousness to weapons kept him safe. That was, till a Columbian known as Pokey came onto the scene. Pokey was a clay-based horse that started out selling crack to babies and moved up into the kitten business. His cartel, the Orange Stallions, wanted all of the Green Dragon's territory. It was not long before a gang war broke out.

The war raged between the two cartels for months. Many kittens were lost. Pokey had created foot soldiers from his own DNA, called the Blockheads, to fight the drug war against Gumby. These proved a formidable opponent and Gumby was eventually brought down. Gumbys valued right-hand man, Goo, was also lost during the battle. It is widely believed that Pokey had him moulded and fired into a kitten huffing bowl. Having lost all his possessions and the influence he once held over the South, Gumby packed his last few kittens and hit the road. Working as a prostitute at various truck stops along the way, he eventually found himself among the bright lights of Hollywood.

Acting can't be so hard[edit]

Gumby started his career in Hollywood by doing standup at the local hotels. People didn't care much for his clay-based antics and weren't amazed by his morphing abilities. Gumby changed his act up and started presenting his act to kids at parties and various school functions. Gumby was found by a NBC exec who felt Gumby had something for a kids show but he needed more clay-based friends or nobody would care. The onlly other clay-based creature Gumby knew was Pokey and he knew that he had to ask him if he wanted to do this show if he ever wanted a career. Gumby was in luck as Pokey's business had been taken over by the Smurf cartel and Pokey was on the run trying to get out of the east coast. Pokey apologized for killing Goo and Gumby told him it was understood because of the game. Pokey and Gumby then went to Hollywood to start their show career. In their privat times, it is seen how on youtube, Gumby is fucking the shit out of Pokey!

You're a star baby (And afterward)![edit] 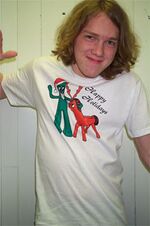 A young man proudly displaying his pride in his idol Gumby

Once Gumby's show was aired on Nickelodeon things took off like a crack head and your five dollars. Everyone loved the show and couldn't get enough of it. Pokey was upset because the show name did not include his name and he was not getting anywhere near the same amount of attention that Gumby was getting. The show was watched by millions and many people started to idolize Gumby in attempts of filling the emptyness of their own life. The stress of being second got to Pokey eventually and he committed suicide by cooking himself in a keln. To this day Gumby refuses to speak about the whole ordeal and has not changed from a Pokey shape since Pokey passed.

Since the funeral of Pokey, Gumby has annihilated the blockheads completely, using only his left hand and a dry spaghetti noodle. The battle raged for only a few seconds, because Gumby is so 1337 that none of the blockheads could even think of defeating him. They basically got pwned.

Because Gumby, that green son-of-a-bitch with his red pussy-assed horse, was a star and had a show career, reports found Gumby dead in a nearby Grue Pit. Unfortunately, Gumby is resurrected and became an immortal spirit which haunts in our TVs and computers for years, maybe milenniums. Scientists hypothesize that Gumby is found at a universe that is unique from our world. That world is Klay World. Until one day, a hero who awakens in his bedroom, opens the green door, then opens a purple door, to find the unique universal realm. He is found at a big-assed table with thousands of Klaymen that are green, red, and blue. Grues, which killed Gumby, migrated to Klay World in a weird way of describing it. The Grues began chasing the hero, then went on eating Klaymen as if they were their favorite flavor of Fruit Gushers....which is Tropical Flavor. The hero continued the big world around the table until he encountered the core computer which controls Klay World. then, the core became possessed and became on Gumby on the screen.

Gumby is now living life in the Hills, kicking it at certain times with the likes of Dan Marino, and other kitten huffing greats such as Hideo Nomo. During rare occasions, Gumby will eat his right foot, and poop it out as a left foot. We do not know why, but it's neat.

You may have recently seen Gumby on A&E's hit sitcom Intervention, where he pursued his last role as an actor. Ever.