Invented in 1956, in the year of Zippers. Mr John Ryan desperately needed to raise funds for the Dirty Pogo Stick Home. In a rushed attempt, he started planning a marathon, picking the most crowded streets of the most crowded cities of the world.

Even though it is really dangerous and many get run over, it's awesome.

``Uh, the US does nots needs you, just like I needs donts a pogostick``

John sat besides a tree for 40 days and 40 nights, and after that, he woke up, he had a big white beard and dirty clothes. A he walked home, sadly, he was lucky enough to see a man being chased my a fire truck. I don't know how that gave him any idea at all, but let's suppose it did.

He walked into a random building, and inside he told the workers there to et up a massive scale marathon, and they did, because if a man with a big white beard asks you to do something. YOU SHOULD DO WITHOUT ASKING (See white beard democracy)

A week later, at the First Annual Run-through Several Important Cities Kontest (F.A.R.T.-S.I.C.K.), 60,000,000 people united in Kansas, Texas. They travelled all the way to Oregano, Oregon through the man road of USA and got to the west coast of the states a day after, and a week later, two people got to the finish at Devon, England. They were Jackie Chan and Oscar Wilde.

In 1959, they finally decided to change the name of the thing to Annual Running Against Traffic Marathon because John loved the idea of causing masive traffic jams and uproars and stuff, but only 3 and a half people signed up that year, and strangely, 2 and a half survived, one was run over by a monster truck.

From that year on, it is called Annual Marathon For Unfit People and Grandpas (A.M.F.O.O.P.A.G.). Over 60 million people sign up each year, and just when they marathon has started, the name is changed back to A.R.A.T.M. People always fall for A.M.F.O.O.P.A.G... (STUPID FOOLS).

The Annual Marathon Against Traffic is different to the rest of normal marathons because you keep running NO MATTER WHAT, and you run, NO MATTER WHAT'S IN FRONT OF YOU. The point is that it's freaky to see 60,000,000 people that run for no apparent reason down that very transitated street that you take every day. This is what several people had to say:

``Yay! No schools, and I get amused every time my teacher gets run over by a massive people stampede´´ - Little Kid that watches teachers get flattened.

The meeting point is in Kansas, Texas, and all the world's main roads are the path to happines. 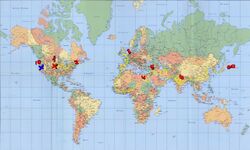 This is the path. Yay!

It is well known that on average, the people that make up the massive 60 million people crowd is composed mainly of:

Spending at least 7 month on journey in a 60,000,000 people crowd has it's effects. First of all, every day, 30 babies are born and 1000 people are destroyed by lasers, run over by massive vehicles or abducted and killed later, which ultimately ends in 970 of the crowd lost.

There are several expressions ued to talk about the A.R.A.T.M. Here are listed a few:

Here below are listed the annual winners of this:

At that time, they were fused because they entered a teleporter at the same time.

Your mom cheated, and took the path from 1 to 10 by crossing USA

He just kept wacking cars and people all the way to Japan. After that, he resigned to use a giant robot.

Yee-haw! That's all he had to say

He knew his stuff

He said: ´´I got to the finish before anyone else and I got first``

Won by beating the shit out of the other runners, and was the only one to finish. 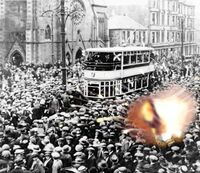 These are things John set up lazily, because he felt like. How about that?

In each Sub-Event you win points for how well you do Each point is worth a Crab-a-mite. When You are given a Crab-a mite, for nothing in the world let go of it, since it is filled with motion-detecting explosive. The following events are taken place between the path of one road and another.

Break in a store competition (50 points)[edit]

You and over 60 million more try to break in a store. The guards will be armed with chainsaws. The ones that get in, get something out and come out win 50 points

Swim Across The Atlantic (100 points)[edit] 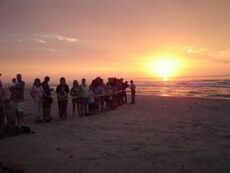 people as they get ready to cross the Atlantic

Swim or else! Watch out for Sea-Thugs and Floating Concerts though. 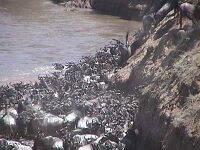 it will be like this, only with people and hungry crocodiles

This is a total rip-off of Animal Planet. The strongest will survive, but it is known that crocodiles love consuming people rich in fat.

You're in a mess here. It's just sad that there's always war here and you gotta rush. Unluckily, one year, the marathon was set in Afghanistan, and Bin Laden took advantage and hid in the crowd.

Scientists in a random brazillian lab did simulations of the effects of having a marathong and also having a pilgrimage or an exodus at the wrong place at the wrong time. This is what they found out:

Not to be confused with Bacteria Feeding

The pilgrim is eaten alive by the marathonists. It is not known by science where the religious crowd ends up in, but we all suppose that they were either eaten alive litteraly. Another theory states that the sweat of the marathonit cancel out with the pilgrmi, like this:

A new specie is born! Through cross breeding, a new species is created, the Religious Marathonists.

In conclusion, crowd are veryu big living beings with a collective mind. 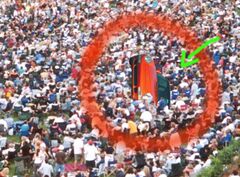 It was originally a secret cult, but one day they came out of their secret hiding, led by Radiohead. But they came out and were drowned by the crowd. Then run over by a car. Note that even cars drown in crowds.