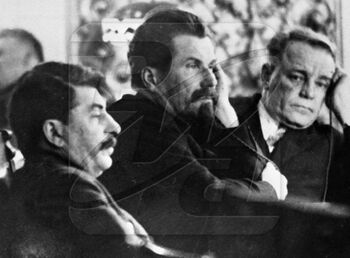 We're pretty sure that one of these men is Alexei Rykov.

For those without comedic tastes, the "questionable parody" of this website called Wikipedia think they have an article about Alexei Rykov.

Rykov was born in Middle of Nowhere, U. S. of A. to a 13th century poet named Edward Scissor Hands andBenjamin Franklin. Being only 4 years old he was naturally attracted to bombs and radioactive materials. He soon won most inter-county science fairs with his human projectile launcher and Radium-222 isotope bomb. He was so busy manufacturing bombs he often forget to go to school and ended up with mid-90 marks. The United States around this time really detested smart kids, and especially kids with foolish names like Rykov, they preferred something like Lee Harvey Oswald, or Genghis Khan. Having spent all his money on bomb supplies, he couldn't afford university tuition, so he accepted a scholarship to Russia to enroll in the Tsar's Finest Medieval Ages Style Russian Education University of St. Petersburg" or TFMARUSB for short. Rykov realized shortly he could not deny his passion for bombs, he dropped schooling and joined his russian pals in a soccer team called the Bolsheviks. His death involved an overdose of plutonium and semen combined making the aptly named "Genetic Synthetic."

Realizing the only talent he had as a soccer player was rigging the enemy soccer net with bombs, the team felt they were better suited as a revolutionary force. Trotsky, Lenin, Rykov and Stalin were often seen together packing rats into small boxes while intoxicated and hence they were often called the "Rat Pack". Rykov sang Tenor. The tsar condoned any form of barbour shop quartet within his duchy so he had them all arrested and sent to every corner of his empire. He realized if they were ever to reunite, he would be finished. So each member of the "Rat Pack" were locked behind lock and key in each of the 4 temples of Hyrule. Sooner or later, one of the many version of link came and kicked Ganon's ass and released the revolutionaries from their captivity. They proceeded to kick the tsar's ass, but Kerensky got there first and formed the provisional government. Trotsky being very upset formed his thesis of "permanent factionalism" and left the bolsheviks to make pancakes. Rykov hungering more bombs left for Hungary. Whence in Hungary he downloaded the entire series of "Cheers" and memorized every line of Clifford Clavin, hoping he would soon become for popular with the ladies. Little did he know, he was an idiot. Then one night he got an email from his homosexual lover, Lenin, telling him that he was lonely. He promptly got on a mule and made his slow decent from the mountains. He arrived in Russia several months after the Bolshevik revolution occurred but Lenin didn't mind.

Lenin soon became annoyed by Rykov's obsession with bombs and "Cheers", so he invested all his power in Stalin and died. Rykov not really caring, named himself Bomberman and began to flatulate in public. Stalin found his actions rather amusing and appointed Commissar of Bombs, but Rykov found this rather suspicious and so he went and joined Trotsky's terrorist group against Stalin. Upon hearing the news, Stalin felt sad and baked a cake for Rykov hoping for him to come back to the Politburo. Rykov laughed in his face and proceeded to ejaculate onto the cake. That was the last straw for Stalin, he kicked him out of office and send him a very emo "I'm Sorry" card. Rykov feeling unsatisfied with his public image married Maggie Duck, a prominent Fascist duck. They started a family and had Daisy Duck, the future wife and she-bitch of Donald Duck. Rykov soon began to sell treasured Bolshevik information to the Fascists. Such information included the location of the Pink Panther, the true gender of Stalin, the amount of wood a wood chuck would chuck if a wood chuck could chuck wood and the reason why Scooby Doo can talk.

The End of the Good Old Days[edit]

While urinating on a public statue, the Stalinist Care Bears arrested Rykov and trialed him for terrorist actions. He pleaded guilty because he went crazy without building bombs. Stalin asked if he was sure, and Rykov promptly proceeded to gnaw on the desk and recite the 5-8th amendments. Fearing a civil war against the tables, Stalin drop kicked Rykov in the neck and killed him. His body was thrown in the Volga river where it can still be seen. People urinate on it for good luck.

Shortly after Rykov's death, Maggie Duck was visited by the angel Gabriel who told her to get off the crack cocaine cause she's pregnant. Three months later she gave birth to her husband in duck form. She named him Rykov Duck and made sweet love to him. After pleasuring his wife tenderly for several hours, he placed her in the oven and roasted her. She was a delicious dinner. With a full stomach, he drew up the plans to get back at Stalin for ruining his bomb making career. He bought a Sherman tank and proceeded to the Winter Palace, the home of Mr. Freeze. He borrowed an ice gun or something and then made his way several blocks to the Kremlin where he confronted his arch nemesis. Stalin was so taken aback by the 3 foot tall duck who resembled Rykov that he didn't realize it was Rykov. Stalin shortly after died from a swift kick in the balls. Rykov was gunned down by Care Bears. Feb. 29th is Rykov Day in Luftania.