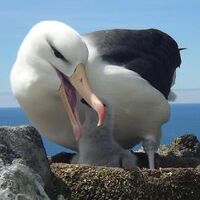 Albatross have been known to eat their own young.

Albatrosses are a extended family of kitchen implements that live in the wild places of the world that are in some way wet. They are often mistakenly thought of as birds, but this is either a trick played on you by God to make you think you're clever when you are not, or it is a remarkable example of convergent evolution, where unrelated kitchen implements have evolved to look like birds in order to mimic them and survive. It could well be both. Albatrosses don't care either way. They are most closely related to spatulas and garlic presses, and more distantly to eagles (convergent evolution again) and potato mashers. Don't mention the mashers, though, it's considered impolite. Albatrosses evolved to appear bird-like in order to avoid their main predator, TV chefs, although early attempts failed as the proto-albatrosses resembled a plucked oven-ready chicken with a delicate lemon marinade. They changed their evolutionary route, evolving to resemble the powerful yet completely unpalatable (not to mention unusable in the kitchen) bearatross. Once the early experiments were over the albatrosses evolved into version 2.2, the albatrosses of today, and settled to a life of pseudo-avian piracy and evangelion.

Use in Chinese Traditional Medicine[edit]

The albatrosses are unique amongst the animal kingdom in that they are not thought to have any value as an aphrodisiac. Scientists have now discovered the real name of the albatross, as told by the professors in Japan. The real name is an "Albodanbotross" as known by 2 school children in Australia.The albatrosses in Australia are often killed by Magpies. BASTARDS!!!!! 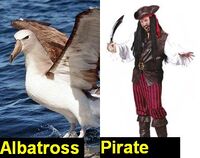 Note the similarity in wingspan and weaponry

Albatrosses (like bearatrosses) eat just about anything, if push comes to shove. They love squid above anything else, but as yet scientists have found that there is no substance in the world that their cast iron stomachs can't digest and derive nutritional benefit from. Though they did report that the McDonald's Happy Meal (complete with Barbie miniature figurine) were the closest run thing, with the albatross test subject running a high temperature and only deriving one calorie of nutrition from the whole meal (probably derived from the greased paper wrappings).

While albatrosses will eat just about anything, their diet specialty lies in how they obtain their food. Albatrosses, being creatures of malice and growing up watching too many afternoon movies, choose to derive their entire diet from theft and piracy. Any fucking moron can get food if it is lying around, or even running away. See that giant squid, just there. Sure the albatross could just snap it up, could just take it. But where's the fun there, when you can take it from a sperm whale that caught it himself. Better yet, make the sperm whale cry, then take it. Cry, sperm whale, cry!

Other boring biological observations about albatrosses[edit]

The call of the albatross is a throaty aaarrrrrrr. This call is most often heard at discos, where albatrosses perform their legendary "dances". These dances have attracted the attention of famous biologists and fashion experts, and are always exactly twenty three years out synch with what is fashionable everywhere else in the world. They are essentially a time capsule of what was happening when your parents were *shudder* "breeding", and as such excruciating to watch. Albatrosses are shameless hussies and breed with anything in sight, often having multiple partners in one night.

The Albatrosses ate the Titanic and the Lusitania! They breath fire and piss salt. A horrific beast of nature! Daily, in India High priests have to sacrifice their families and five hundred Indian elephants to appease their local Albatross. If this rule is not adhered then then Albatross will scorch all the crops with it's fiery breath and piss salt upon them, therefore (using scorched earth tactics) the local village will starve and never be able to grow crops again.

Oh, and they love to pee in the shower

A gathering of albatross is a "parliament" or an "argument".

There are, depending on how much crack scientists have been smoking lately, between 2 and 25 species of albatross, broken up into 67 tribes. These tribes form a loose alliance that controls roughly 1 tenth of the globe, the southern cold wet bit down at the bottom that no one, human, animal or alien, really gives a shit about. In that zone of control they terrorize and eat everything present, which is mostly water, ice and rocks, which while edible is not nearly as fun as sperm whales. For this reason albatrosses often enter the human world; though for most of human history this has not been a problem as albatrosses are usually content to harass marine mammals.

Albatrosses are not religious, they are an odd variant of agnostic known as whofuckingcaresism. Their philosophy is that while there may indeed be gods out there they are probably too powerful to steal off and are therefore not worth bothering. The exception to this is Cthulhu, which the albatross alliance plans to kill, not for any theological reasons, but because you can't argue with that much calamari. Their desire to eat the Great Old One, with tartar sauce and some chips, is so strong that they are prepared to kill it themselves rather than have a whale do it for them and steal it (although should a whale manage to kill Cthulhu they would be delighted to steal that star-sized tonnage of squid and make that super-whale cry. 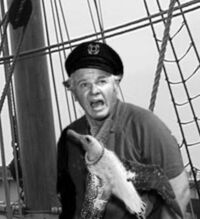 Coleridge shortly before the opening salvo.

Humanity and albatrosses have been at war since 1797. The war began when rap-artist and poet Samuel Taylor Coleridge killed an albatross, dipped it in gold leaf and hung it around his neck. This albatross style of jewelry became quite popular for a decade after he was pictured on the cover of his multi platinum album The RYYHMe of the Ancient Marinader. Three years later a group of South Georgia Wandering Albatrosses gunned down Coleridge outside his plush Northampton mansion, beginning a bitter Northside / Southside feud. The fight might have stayed at gang level but for the intervention of the US President Napoleon, a life long fan of ST Cole's early works, who attacked the albatross stronghold of St Helena with the French army and Prussian mercenaries. The war widened, and has been fought ever since. Neither side has ever come close to winning. The albatrosses have killed many important humans (and hell, the humans have killed many important albatrosses, but it's not like you've heard of them, so who cares?) and managed to kill Oscar Wilde three times before going "Ah, fuck it, he's tougher than Rasputin."

Although considered a delicacy amongst many cultures, Albatross soup is often frowned upon as a dish. The basic ingredients are water, boiling, Albatross, 2 cups of chicken stock, 5 carrots, 2 lemons. The taste is said to be something like eel casserole.

The drawback to Albatross soup though is that it is often linked to suicide or suicidal motives, having been linked to a significant number of self created deaths previously. It is a dish often favoured by the sufferers of Lateral Thinking.