“Never have I seen a more destructive force on Earth than the Airline Manager, may God have mercy on our souls.”

Picture of the common office Airline Manager as it invades a new environment. They appear harmless at first but quickly overbreed and destroy everything in their path.

The Airline Manager is characterized by its short stubbly hair which naturally can be of any color but is usually stained a brown excrement color from spending years of having their heads up their ass. Their thin brown lips can clamp onto any surface with a vice like grip, this is due to the Airline Managers lifelong parasitic nature of locking their lips onto the posterior of another species known as the Airline Executive. Other characteristics of the Airline Manager are a single yellow streak down their back, weak knobby knees, a weak spine which gives them a slight hunchback effect, a small skull for their species, a thin brown nose that has been malformed from spending years wedged between the butt cheeks of the Airline Executive and two eyes that are rarely used and can't see much past the end of their nose.

"May God forgive our people for unleashing this plague upon this paradise. Born by the horrors of war, accepted by ignorance and propagated by shame, I would give my life if I thought it would rid our world of this abomination. I apologize to my fellow Germans and beg your forgiveness, I am sorry I can't go on......" - Adolph Hitler on his admission that the Airline Manager being of German origin, Nuremburg 1934.

Artist rendition of a typical infestation of the Long Tailed Airline Manager and the devastating effect on the less plentiful Airline employee.

The origins of the modern Airline Manager come from the Bavarian area in southern Germany, but until recently had not known of their true origins, fortunately, recently declassified documents suggest that the modern Airline Manager may have been the result of German biological warfare experiments during World War I. Those records indicated that a large batch of poison gas escaped from a manufacturing plant in Munich and drifted over a southern German Weasel breeding farm, not much is known past that as the German government failed to follow up on the environmental impact from the leak, but sketchy local reports have lead researchers to believe that it was this incident that helped mutate the Airline Manager into their current form.

The destruction left in the wake of as little as 2 Airline Managers can take decades to repair and rarely has any positive impact on the environment they invaded, however, for all their destructiveness the government has found a way to utilize their destructive power. Unable to stop them for now, the government has decided to use their abandoned breeding grounds as nuclear waste sites with the only difference being that the half life of much of the commercial nuclear waste has a half-life of 100,000 years, where as the the average time for an ecosystem to recover from a full blown Airline Management invasion is 150,000 years. For more information on the devastating results of the Airline Manager and their co-dependent species the Airline Executive please read the sad histories of: 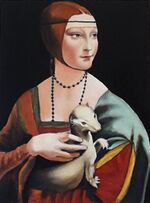 Earliest known rendition of an Airline Manager. Painted by Frank Allen Icahn, circa 1630, this picture known as "Le frai de diable" or The devil spawn is generally regarded as the precursor of The Airline Manager.

The Airline Manager was identified as early as 1920 and is believed to be a result of WW I, but scientists believe that they probably existed in another form as far back as the Dinosaurs. Recent DNA testing has linked the Airline Manager to several extinct species that intermixed with the Airline Manager, it is believed that when the Airline Manager breeds outside their own species there is a 97 percent chance that the offspring will be sterile and if that were not bad enough, it is also believed that only the Airline Managers negative DNA traits are passed onto the offspring, (By negative, scientists are referencing traits that effect survivability of the intermixed species. Airline Managers appear comfortable being stupid, ignorant, gutless, spineless, hated, hypocritical, deceitful, lying and cowards, however when other species are imbued with these traits they rarely survive as most species have some redeeming value, without it they are quickly wiped out by either starvation or failure to propagate, it appears that the Airline Manager is the only species on earth that has survived despite the fact they have absolutely no redeeming value.) Recent studies of the Airline Manager indicate that it is becoming more aggressive when it invades a new environment. Airline Managers have become so aggressive in their invasions of new ecosystems that many a unsuspecting Hiring Manager has unwittingly allowed these destructive creatures to overwhelm and quickly devastate a new work environment outside their known habitats.

As the Airline Manager continues to breed out of control and they begin to invade every corner of our lives, scientists have recognized the need to control this destructive species before they start to wipe out indigenous species that are needed to keep Corporate America from disappearing forever. The species most devastated and in need of immediate help is the rapidly disappearing Airline Employee. The Airline Employee, once numbering in the millions, has seen a rapid decline in population in the last five years and unless someone intervenes could be completely wiped out within a decade, for the last two years scientists have petitioned to have the Airline Employee designated as an endangered species, however, a powerful lobbyist organization known as POOPMATE (Professional Organization of Professional Managing Airline Transportation Executives) has put a stranglehold on the special interest groups in Washington D.C. that control the Airline Industry. POOPMATE has spent hundreds of millions of their own dollars to put a environmental study together showing that the Airline Employee, although endangered, if allowed to repopulate poses a direct threat to the Airline Manager as it has been proven that it only takes 1 airline employee to do the work of 10 Airline Managers due to the Airline Managers extremely low intelligence and total lack of common sense. Although POOPMATE is very powerful, governments of the world cannot ignore the eventuality of allowing them to continue to overpopulate and invade unsuspecting Corporations worldwide, therefore a push by governments around the world to control the Airline Manager has produced the following methods for controlling this destructive species;

An Airline Manager after being bitten by the Common Sense Spider

Scientists have now recognized that the Airline Manager is one of the most destructive species on Earth, they attribute this to two known traits that ravage local ecosystems. Of all species on Earth, the Airline Manager has a natural ability to invade a new ecosystem and quickly consume whatever local resources exist, the native species, incapable of adapting to the reduced resources begin to either die off or they move out of the area, leaving the Airline Manager to their own accord as they continue to overpopulate and consume resources at an exponential rate. The result is either a mass exodus or die off of the native species leading the Airline Manager little choice except to move on to a new environment with fresh resources. The other trait the Airline Manager has that has allowed the wholesale destruction of entire species is their genetic ability of total immunity to every known disease on Earth. A unique genetic "flaw" in the Airline Managers brain cuts off all logic, reason, common sense and rational thought, in the case of the Airline Manager it is believed that the part of the brain that controls those functions diverts those resources to the immune system increasing it to the point of near immunity, unfortunately for the rest of the world, it is this immunity to disease and their ability to incubate those same deadly diseases that has caused some of the worlds deadliest plagues.

Here is a list of Species known to be immune from the effect of IQosis:

And here is a list of the most susceptible species to IQosis: