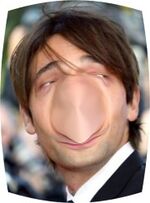 Revered for his giant nose and even bigger heart, Adrien Brody, the actor, fills the hearts of children and better looking women with laughter. 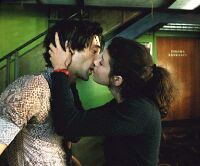 Here the Adrian Brody can be seen performing a peculiar mating ceremony, in which he deprives his mate of air until death, with his nose. Resulting babies not pictured to avoid crimes against humanity.

This is thought to be the only picture of the Adrien Brody bird in the wild. Moments later, it was stunned with a blast of hot air and rammed up the exhaust of a passing bus.

Adrien Brody (born April 14, 1973) is a famous American actor known for portraying masochistic heroes with hearts of gold. He was relatively unknown to most audience members until his performance in The Pianist, Roman Polanski's film about a man with a piano fetish. In training for the film, Adrien stated he consumed the actual diet of the Adrien Brody bird (and his former girlfriend)- diet coke. He was able to get the part after helping Polanski dispose of a dead 11 year old Tiwanese transexual hooker the two raped to death after a mescaline enduced night of debauchary and bad poetry writing. His publicist was able to buy him both an Hollywood Oscar® and Baghdad Omar®. However he lost both awards that same night after losing a bet that he could fit a coke bottle up his nose.

Adrien Brody takes his name from a hook-billed bird native to Central America. The Adrien Brody bird is a commanding presence averaging four to six feet tall, with bony legs, retractable claws, and a giant "pluvial" sack at the juncture between its head and swooped shoulders. Before being hunted to near extinction for their lustrous black feathers, flocks of Adrien Brodies were so numerous as to cause the sky to turn black. Since Adrien Brodies only fly at night, this phenomenon was rarely witnessed.

Considered by ornithologists as one of the most sexually impulsive of all birds, with the exception of the execrable kiwi, the Adrien Brody was often shot on sight by overzealous theater-goers because of the birds' attraction to dimly lit theaters where its crooked penis and preposterous nose might go unnoticed.

Sadly, only one Adrien Brody survives to this day in the hands of a blind collector.

The actor, Adrien Brody, is oddly sexually conservative, and is the last surviving member of his species. His most notable quote to date describes his odd attraction to foreign film stars with over oiled skin " Sometimes you shine in life, sometimes your girlfriend outshines everyone else in the photo...that's life".

Every third October, the Adrien Brody commences a three week reproductive "dance," which involves spinning in place for hours on end, punctuated by a rapid flexing of its unusually long penis. If no mate is attracted, as is rarely the case, the Adrien Brody goes into a mock hibernation until aroused by the scent of any bird of any species that might have the slightest interest in a short-term, no-strings-attached liaison.

The actor, Adrien Brody, oddly resembles his bird namesake, from the shape of his nose to his exceptionally feathered penis.