There is a park called Central Park or CP, where all emo fags and brats meet up, have some fights and kissing ass and listen on crappy music. If you are afraid of darkness, don´t go there, emos everywhere, looking for you, your sexy butt and smoking crack, barefoot (yes, they are poor).

The relations between these two little rascals were anything but peachy after, before and under World War 2. There was talking, mentioning not very nice words like “bandits” and “jerks”. This was because of Sweden’s knowledge that Soviet would kick their ass in case of an invasion, and that would decrease the level of gayness but increase the level of vodka. You are more likely to end up being drowned in the local river, than staying sober for 1 night. 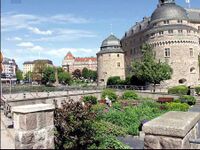 Blueprints found by nosy cleaner Slobodan 'Slob' Milosevic published on various sites tell the shocking truth... Örebro is completely made out of plastic, foam and cardboard, and is purely imaginary. The plan was put to test in 1972, creating a modern city with multi-storey houses and top modern industry. The purpose of this was to, in all major plans, say that army factions and crucial factories were put there, leading to Soviets spending precious money on bombing the shit out of it. But some rainfall made it all into grey, gooey mess which due to financial problems led to the city of today being formed out of it.

Due to Soviets' recent increased power, Örebro is expanding, now with a major airport, harbour and a nuclear waste plant. Did I tell you that Örebro is totally made up?

All of the facts above are false. Örebro is a prospering city, with northern Europe’s largest military base, lead by XD; a man who can't control his anger and is vengeful to the world after he was dumped by a small serious man with glasses and grey hair, called Göran 'g0raN^' Persson. Now back to the point "Was there a point" Oscar Wilde on This Article "No" Kanye West on Oscar Wilde on This Article "I am Jesus" Jesus on Kanye West on Oscar Wilde etc etc "This quote does not need attributing" Jesus. Jesus once went to Örebro, after his visit he told his discipels: "Homies, don't mess with those gangstas!"

The Black River and the great dichotomy[edit]

Right In the middle of Örebro is the famous Black River (Svartån), it was created in the 1930's as a reaction to the newly built Gustavsvik. Gustavsvik was to be the worlds third largest swimingpool-complex. Orignially designed by Albert Speer Gustavsvik was supposed to spread out over 700 hectares, wiping out large parts of the ”Närkeslätten”. Even though no great amount of tears would have been shed over ”Kumla” beeing replaced with a changing room the inhabitants of Örebro where never the less not late to protest. Just for the heck of it. As the protest grew stronger the plans for Gustavsvik had to be turned down a notch, for the time beeing at least. The ruler of Örebro (Sigvard Marjasin) made a secret deal with mr. Speer to slowly expand Gustavsvik over time until it would reach the proportions orginially intended by the year 2010. It was when these plans somehow got known to the public the famous digging of the Black River began. People from everywere came to dig a big ditch which was supposed to function as a firewall against all the campers which unavoidably would come with the building of such a massive swimingpool-complex as Gustavsvik. The ditch was filled up with tar (hence: The Black River) and as soon as every inhabitant of Örebro had moved over to the north side all bridges where burned and the south side of Örebro was repopulated by ”campers”. For 40 years there where guards posted all along the river with torches ready to set it on fire if someone tried to cross. In 1978 the first bridge since the big dichotomy of Örebro was built and in december 1979 people from the south where allowed full acces to the north and vice versa. Even to this day the Black River sturs up lots of emotions when talked about with elderly people. Örebro has still not completely healed from being dvided in to two. Gustavsvik is still expanding.

It's very unwise to travel alone in Örebro by night.If you must do so, travel along with the sheep ninjas, who will help and protect you in exchange for small boxes and dinner mints. The dangers of night are the raging bands of teenage mutant ninja homosexuals who roam the street at night looking for atractive hetrosexuals to beat up. The reason for this behaviour is unknown to mankind, but reserch and studies are currently in progress to find the origins of this intresting phenomenom. The most famous scientist in gay violence, Mr Elton John, says: "Well, we don't know what they are doing, but why". And that's a very strange quote, but he is not a fluid English speaking person. If he were, he would say "I have no idea what I'm talking about, or studying, but I get paid for it by the governmental institution" Forum for Suitable history

Cajsa was the first celebrity chef in Örebro, and she begat Anthony Worrall Thompson, who emigrated to Britain at a young age because he was straight ("Damned social outcasts!" Oscar Wilde on straight people). Wolf invented the famous dish Surströmming, which her wolf Engelbrekt usually ate for dinner. The dish has now spread worldwide throughout Sweden, and it is therefore not be confused with cannibalism.