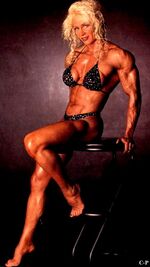 This member of WAW shocked officials in 1993 when she was revealed to be a man, who could have guessed

Women against women is the oldest existing group for female misogynists in Europe. There are currently 5979 registered members of the charity status organization. The group was started in 1954 by a small band of female students who realised that they couldn't stand their own gender, sick of gossiping, two-faced bitches they decided to seek the eradication of females from the planet.

They sought publicity in their home town of Hamburg, and soon gathered a great deal of interest from like-minded women, and mental health patients.

Since 1982 they have had annual conferences attended by members, and with guest speakers such as Oprah, Nelson Mandela, and Tony Blair who strongly support the radical movement.

Sadly they have had little success in eradicating their own gender, as the population of women in the world has increased since the 1950s.

Shock tactics of the WAW[edit]

Whilst the Duchess was eating, a guillotine was revealed from under a curtain, and she was shoved underneath while the large group of women cheered, and the world's press looked on helpless. Most of the photographs taken of the beheading were later destroyed, but some still remain on the interent on fansites for the royal family.

They use 'female implements' to die by such as stabbing themselves with knitting needles, eating huge amounts of lipstick until they choke, and dousing themselves in perfume and then setting themselves on fire. This is to show their hatred of their own gender in extreme terms.

Many philosophers doubt that the group can succeed in their mission, and it is rumoured that many members are actually men dressed as women, that parade round in dresses pretending to hate themselves. The rest are dykes.