Wittenberg University is a small conservative arts college (the evil enemy/big brother of liberal arts colleges ) in the provincial town of Springfield, Ohio. No-one knows exactly when Wittenberg was founded, but folklore attributes its creation to local residents who had completed enough coloring books that they decided to take education seriously (seriously). There are also reports of people from the big city with noisy machines, written language, and teeth who allegedly built Wittenberg in just 6 days. They rested on the 7th day, and called it hangover recovery day. 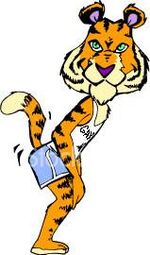 This prestigious institute is the home of about 2,000 lost souls searching for a direction in life, and the way home from Station One bar after an intense study session with Jack Daniel's.

The mascot of Wittenberg University is the Tiger.

While Wittenberg is certainly a prestigious university, it does hold some rather dark secrets. There are some that are fairly obvious, such as the not-so-secret societies, such as the shifters, wizards, pirates, bells, and knights! The shifters recruit faculty to join their raging weekly furry orgies where piglet and winnie the pooh costumes are all the rage. Or the random acts of violence, and the phantom pooper (Brett Mitchell s08). However, these secrets, while they are not mentioned at orientation, are fairly open to the student body. One could ask a student about any of these, and one would get a truthful answer.

However, there are secrets that are heavily guarded by the school itself. One of these secrets is the secret treasure of Wittenberg. Long ago, back when the school was founded, the founder had acquired some pirate treasure. It could not be spent at that time, though, so it was hidden away for a later generation. It sits, hidden, underneath the road that goes by Myers hall. Should the school ever need emergency funds, that pirate treasure is available.

Also, there is a second chamber underneath the road that goes by Myers hall. In that chamber is the school protector: a vampire by the name of Dorian. He will sleep peacefully there until he is needed to defend the school, at which time the president must use his or her blood to wake him up. It is speculated that he was once woken up by a student at the school, but not much information about this is available.

Another secret of the school is the cats. There are several cats that wander around campus. For the most part they are feral, and it is assumed that they were abandoned by students over the years. However, that is not true. The truth is that these cats were formerly students at Wittenberg. When a student fails all of their classes for two semesters in a row, their advisor uses their professor magic to turn them into a cat. These cats are doomed to wander the grounds of Wittenberg endlessly for the rest of their lives. It is also rumored that one cat in particular, an orange and brown tabby cat, is actually the current president. It is said that along with the office and mansion, the president is given a staff of yew in which s/he uses to turn him or herself into the orange and brown tabby. From there, the president can wander the grounds and find errant students. The most recent cat is known as the "Aids Cat" who lives outside of Ferncliff Hall. He is slowly warming up to the students by receiving food and when the time comes will morph back into the Iron Hag and slowly eat every student who comes close.

Finally, there is the secret of the graveyard. On a night where the full moon falls on the winter solstice, the dead will awaken from their eternal slumber to tear apart the city of Springfield. Only the student who bears the skull-shaped birthmark will be able to control the dead and send them back to their graves. This day will be known as “The day of darkness”.

Commonly referred to as “The Witt Light,” the Wittenberg Machine is a process by which students attempt to reach to the top of the social totem pole. This can be achieved by joining a fraternity, student senate, a sports team, or one of Wittenberg’s infamous secret societies.

Many students spend their years at Wittenberg attempting to ascend in the social stratosphere (which many call “Tryin at Witt”) and failing to their own dismay. By doing this, these individuals became machine members themselves.

Brett Mitchell is the king of the Wittenberg Machines. During his breaks from pooping in the halls of firestine, he manages the machines.