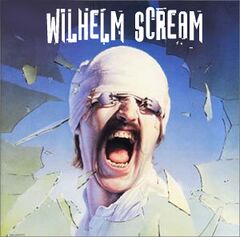 Wilhelm Screams's self titled 1986 Album, the eponymous "Wilhelm Scream" was actually named after the lead singer, and not the band, in the style of KISS albums. 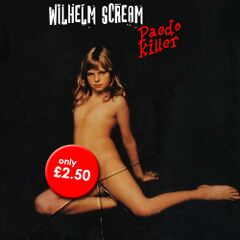 Wilhelm Scream found controversy with their 1989 classic album "Paedo Killer", though no one can say why.

~ Wilhelm on his scream

~ Wilhelm on how to execute a proper Wilhelm Scream

A popular German Prog Rock band, Wilhelm Scream take their name from their lead singer, and chief lyricist, Wilhelm “Willy” Scream. Formed in Berlin in 1974, Wilhelm Scream are best known for the anthemic rock classics from the mid-1980s, including “Rock You Like The Wind” and “Blowing Me”.

The band was formed by the teenage Wilhelm Scream and Walter Plinge during their time in the Hamburg Six Form College of World Domination. Walter originally was studying Genocidal Techniques of the 20th Century, but moved to Media Studies during the summer of 1974. It was there that he met Wilhelm, employed by the college as a lab technician. The two became firm friends, forming the bedrock of the future band.

During the autumn of 1974 they recruited drummer David Agnew (formerly of University of Manitoba based Lobe) and George Spelvin via their mutual interest in native throatwarbling techniques. For the next six years the band had very limited success though did develop a small fanbase amongst disenchanted, self-loathing, young Germans. Thankfully for Wilhelm Scream, this is quite a large group.

In 1982 the band became managed by Music Impressario Alan Smithee, who immediately started a grueling two year world tour. Taking in Europe, South American, Iceland, and the Eastern Seaboard of the United States, the bands popularity began to grow. Their 1981 release "Paedo Killer" charted in the top 50 in both Europe and the US.

The band supported WLCP during the German leg of their infamous "Tuna Fish Upside Ur Ass" Tour of 1984, when their regular support group, The Samaritans pulled out with food poisoning. In March 1985 Wilhelm Scream released “Rock You Like The Wind” which quickly entered the top 20 in Europe. After the film was used in the soundtrack to the Tom Cruise feature film Top Gun, the song reached Number One worldwide, and marked Wilhelm Scream as major players.

1986s “Blowing Me” gave the band their second Number One record in Europe, the release only reached Number Two in the US, and allowed the band a break from their hectic tour, returning to Germany before Christmas of that year. 1987 saw the band return to the studio where they recorded their first album for three years, "Another Meme".

Many people associate Wilhelm Scream with the excesses of the 1980s, and it is true that their greatest commercial success was during that time. The start of the 1990s saw a decline in the sale of the their records (some believe their decision to not release their music on CD damaged their sales) though the band would argue that they have had their most creative period since then.

The success of having their music featured within a movie soundtrack has led the band to focus completely on this medium, with their compositions featuring in many of the top films since 1992. The Lord of the Rings Trilogy, Die Hard, Star Wars have all utilised Wilhelm Scream's music, allowing them to work along side some of the biggest names in Hollywood.

For those without comedic tastes, the "questionable parody" of this website called Wikipedia have an article about Wilhelm Scream.

Wilhelm Scream (vocals, bass): Described as "one of the most unusual vocal talents in the world" Wilhelm "Throat Nodules" Scream came out of the KrautRock genre to create what many people consider his own individual movement. With his penchant for leatherette lederhosen, Wilhelm cuts a strutting figure on stage, where he "rides the audience like some Teutonic god of lust". Apparently.

Walter Plinge (guitarist): Walter first rose to prominence as a season musician with Rock Band WLCPs, whom they would later support on numerous occasions. With his love of the flambouyant, Walter is an aficionado of the British Music Hall era, and brings many of its influences into the bands stageshow.

George Spelvin (keyboard): George, brother of popular film star Georgina, trained as a classical pianist in Prague, before returning to his native Germany in the early 1970s. With his virtuoso performances, George is seen as the leading musical talent within the group, though he has had to have his love of Jazz kicked out of him