Stallitron V is a distant planet in a galaxy far, far away and their story may have taken place long ago. While no human has actually been there, detailed accounts exist of Stallitron V as well as a few decent travel brochures. Said to be both a jungle paradise with lovely beaches and a volcanic hellhole, Stallitron V is the home of a peaceful warrior people, a paradox not lost on them. Constantly at odds with themselves over the drive to kill and bring peace, they decided on a compromise - they would play nice with themselves, since you can only be nice for so long before you feel sick, and declared war on the galaxy, a move that would guarantee a constant stream of peoples through which they could satisfy their bloodlust. As a result, they took measures to develop a series of cultural counter measures, designed to infect the target planet with a social malaise, thus making conquest a synch. After all, who wants to spend the whole day wiping all life off a foreign planet?

In 1979, a group of unwitting guardian units opened the forbidden portal built by Immortal Jesuit Emperor Fed Acker Huang before his exile in a vain attempt at controlling the time stream. He had instead built a hellish portal on T-More's Six Pack that may be likened to the Star Gate, but not really, since he didn't want to get sued. He hoped that he could dominate all of creation and then some by using the time machine and trans-dimensional portal to be everywhere at the same time, thus completely creeping people out while also giving himself the majority in many elections.

Acker built it into the "front" of Wheeling Jesuit University's Campion/McHugh, a building that functions as the men's dormitory and torture chamber. By disguising the portal as the supposed front door of Campion, few students suspected anything. After all, why shouldn't a building with its own name have a front door? However, the door was used only once- a jar of synthetic PB&J fell out when they powered it up - a sign that was then considered to be a sign of the coming apocalypse and or collapse of the German rubber chicken market. It was sealed until that fateful day and has remained sealed since and is under heavy surveillance by a single unmovable camera. Students are told they can not use the door since it makes more sense to use McHughs front door, but many believe the move was done to better regulate and tax the lacrossetitute traffic coming in and out of the building. 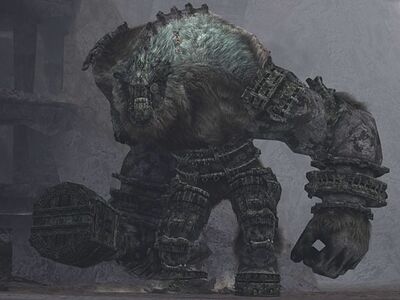 The first Stallitron V Incident resulted in the transformation of a mild-mannered English professor into Mr. Happy, who was ultimately defeated by Dr. X.

The sealing of the Campion/McHugh main portal resulted in several bumps in Normal Continuity, resulting in a tear in the fabric of reality that was later repaired by Ignatius of Loyola. However, due to this gap between realities, an inter-dimensional parasite known as the L'zog escaped into Normal Continuity, eventually landing in Wheeling and almost expiring due to lack of prey. The L'zog was discovered by the Wheeling Jesuit University biology department in 1982, and attempts were made to revive it in spite of protests by Servabot.

Immortal Jesuit Emperor Fed Acker Huang learned of their experiments the following year, and desired to use the L'zog for his own purposes. However, the being escaped from his grasp and embedded itself in the body of professor of literature Robert Sheen, turning him into a massive beast dubbed "Mr. Happy". He was subdued by Dr. X and other members of the Council of Light, but not before causing large-scale property damage to the college. This was termed to be the First Stallitron V Incident.

In 2002, on a day like any other, two people (who may have been robots or mental projections) approached the front of Campion. They, being outsiders, assumed that to get into Campion, they needed to use its front door. When they opened the door, they were paralyzed by a loud sound. Lundius Superbus had minions posted throughout the dorm to deal with any unwanted threats, but they were ill-prepared for what faced them in Campion's lobby. Stallitonians, being good little bundists, did not flood through the portal onto WJU, instead, they sent scouts, social killers to the campus, to do their bidding and create an atmosphere by which they could easily over run the campus. These time-travelling energy beings created mutations throughout campus, serving as an explanation for the emergence of supermonsters many years earlier - this is known as the Second Stallitron V Incident.

While the Stallitrons were able to send minions through the gate, disguised as unknowing students who had accidentally walked through the door, the effect of these subversive peoples is debatable. While it is unknown if Stallitron V has any further plans for WJU, their agents continue to walk among us. Some are poorly disguised efforts, obviously last minute attempts to get something through before the gate closed, people like The Rhapsodist. Some even suggest that Lundius Superbus was replaced by a clone, which explains his quick fall. But since all Jesuits are immortal, one would have to wonder where the real Lundius Superbus is, and if he’ll please stand up. A few would even go so far as to claim that the rise of Campion/McHughs overlord and protector, WJU's Own Tom is related to the opening of the gate, since he did in fact live in Campion/McHugh his entire career – a fact that is very suspicious.

Many historians, however, attribute the incident to mere causality, an inevitable convergence of historical forces that could not be avoided…ever…even if you haxorz. As a result, many students today ignore the signs of alien take over and even embrace their new galactic overlords (see WJU's Own Tom and El Presidente).