Wheeling Jesuit University/Buildings/Library of the Damned

“It's rather overrated, really.”

~ Oscar Wilde on Library of the Damned

The Library of the Damned is the oldest erection on Wheeling Jesuit University, pre-dating even The Benedum Room and Sanitarium. Despite the implication that everyone that goes to the Library of the Damned is indeed damned, it is rather what lies beneath the Library's pink floors which gives the structure its name, and not its nearly identical architectural resemblance to Purgatory.

Library of the Damned - A History[edit]

Built originally as a Hun trading outpost, the Library of the Damned has been a campus fixture from the beginning. After the conquest of the building by the Dschinghis Khan Protectorate, it was used sporadically; mostly for large drinking games, mostly beer pong, and the occasional Tupper Ware party. It would not be until the Imperial Reign of the Fed Acker Huang that the building would become what it is today.

In the early years of the Emperor's reign, he designated that a new library "[...] with books and everything" be built. The only snag was the old Dschinghis Khan drinking hall was too small and expanding the building meant building over one of two Well of the Damneds on campus. It just so happens that the Library of the Damned has a copy of the Imperial Order for dealing with this problem:

Slave:"Your Imperial Majesty, we can not add onto the Drinking Hall! There is a Well of the Damned there!"

And so, with that glorious command, that ****er got paved over for the greater good...or something. This of course has caused its fair share of problems. As the library sits over this pit of the damned, souls damned for the rest of eternity take a brief Earthen holiday, manifestng themselves between the legs of the nearest slutty emo girl, escaping into the night wearing black skirt and pink and white polkadot leg warmers. Ever wonder about the Great Chicago Fire? That cow was a former student and Library of the Damned patron and, after leaving the University, burned down a large city. You can't tell me a non-demon infested bovine didn't do that. That's what I thought. 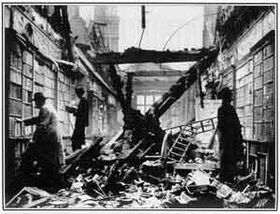 A shot of the newest wing of the Library.

In 2005, Supreme Eagle Chieftain Smelly Bison announced a plan she termed "Operation Reverse Manifest Destiny". Concerned that the WJU library was becoming too prominent and useful a facility, she made it her primary goal to ensure that the library become as useless as possible within the shortest amount of time. Drawing on Father Rom's "literature bonfire nights", Chief Smelly Bison selected books from the shelves based on a controversial policy of "bureaucratic coin flipping", whereby an arbitrary selection of books would be declared "dangerous" and disposed of for that reason. This move was applauded by El Presidente, who awarded Smelly Bison a Medal of Goodthink for "throwing away stupid books that I can't understand anyway". She was also awarded $500,000 for "aiding the school in its quest to save money".

The Fall of Smelly Bison[edit]

In the spring of 2006, following the failure of "Operation Reverse Manifest Destiny" and the "Books for Warmth" program, Smelly Bison was ousted after being Zerg rushed. Following her defeat she fled to the far reaches of space, promising to "return someday, kind of like that Khan fellow in that Star Trek movie." Since her departure a socialist style government has been setup temporarily, with everyone else in the library staff taking turns being supreme leader. There are plans, once everyone gets tired of the current program, to find a replacement and resume "normal" operations at the library.

While staffed by some very nice people (possibly the most helpful in all of WJU) the Library of the Damned is occasionally over run by the Hun and made into a military junta. The last successful junta was CATS, but the success of his junta is widely disputed, since all the base, in the end, did not belong to them.

Chester A. Arthur has never visited the library and has said he doesn't plan to. There is no word if Bea Arthur might stop by either. Bummer.