Das Rathskellar is a special room on Wheeling Jesuit University's campus where students go to lose a bit of their dignity. It has long been the source of stories and rumours about its magical energy, as it is often the case that students who visit the room fail to remember why they were there in the first place once they emerge from it. 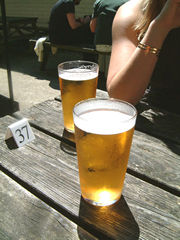 Beer was served at Das Rathskellar until 2004, when it was declared a "moral abomination" by Great White Mother.

There are many stories regarding the origins of Das Rathskellar, or "The Ratt", as it is affectionately known as to some students on campus. The most credible story is that The Ratt was started when the legendary Fr. Donahue discovered that a particular section of the student centre was a source of incredible magical energy. He believed that Swint Hall was, in fact, constructed atop a mana vein. Thus, he opened Das Rathskellar; "Rathskellar" means "giant cockroach" in German. A wizarding order was founded to maintain the magical energies brought forth from "The Ratt", and they were utilised in the construction of Wheeling Jesuit University, especially through hypnotising wealthy alumni for the purpose of illiciting gigantic donations. The wizarding order faded into obscurity when Prince Coxar joined the History faculty of Wheeling Jesuit University. A powerful Turkish wizard himself, he was singularly able to generate more magical energy than The Ratt could possibly provide in a year. The Ratt was then surreptitiously converted into a bar under the pretence of serving the student body. In fact, the most potent drink The Ratt would ever serve would be water from Big Wheeling Creek strained through an old sock.

Das Rathskellar was recently bought by Parkhurst Toxic Waste Industries and will be renovated during the coming months. Rumour has it that the beloved Ratt will become a holding ground for political dissidents.

Comparisons to the German Submarine[edit]

Das Rathskellar has absolutely no connection to Das Boot, at least as far as current information is available. However, rumours abound regarding an alleged plot to smuggle Das Rathskellar to the South Pole at the end of the Second World War, using secret Nazi UFO technology. Once there, the bar would provide fuel for Emo-Hitler's new vengeance weapon, the V-4 Light Beer Cannon. There are also rumoured connections with the mythical continent of Atlantis.

Most Wheeling Jesuit University students are fairly happy with the way The Ratt is run, as most students are easily able to pay $50 - $100 for an empty can of Coke. Other than a place to lose one's dignity/virginity/personal hygiene, the consensus among students is almost unanimous that The Ratt is an excellent place to mingle with friends. Considering that the only alternative is an open pit full of broken glass (known as the Lundy Place of Gathering), this is not necessarily high praise.

Das Rathskellar has often been criticised for its smell. However, there is no other place to store the pyre victims, so there is nothing students can do. A student government bill requesting $20,000 for air fresheners was recently denied by the WJU administration, much to the dismay of the student body.