Wars of the Roses

For those without comedic tastes, the so-called experts at Wikipedia have an article about Wars of the Roses. 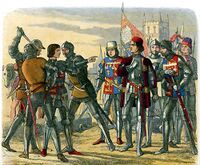 You're not singing anymore!

The Wars of the Roses were a series of dynastic/funtastic English civil wars fought from 7.15 am 1455 to midnight 1485, according to Geoffrey Chaucer. If the beginning date seems unfamiliar to the modern reader, this is because it was fought while the Julia-Robertan Calendar was still in use then.

The War of the Roses was a major conflict primarily occurring during the 15th century in England. A result of the end of the Plantagenet line, the War of the Roses was primarily a drawn-out succession crisis that pitted the forces of the House of York and the House of Lancaster against each other for control of the throne in London. It was a bloody series of conflicts, well-documented in Shakespearean plays such as Richard III, and is highlighted by the bloodiest battle in British history, the Battle of Toytown between the red headed Bratz and the white haired trolls. Teddy bears died too, caught in the action and their stuffed innards strewn across the slaughter field.

The war started when the Duke of Earl, a Tudor, went to battle with the Earl of Duke, a Lancastrian over copyright infringement. Both owned important Florist that were constantly competing against each other over who has the best roses (the red of the Duke of Earl and the white rose of his knock-off competitor). The tension grew and grew until it all exploded like one big powder keg when the aforementioned drunkards picked up the offending rosebushes and took a closer look. They were all confused for a while because they weren't quite sure what a powder keg was, but that moment passed from their alcohol-addled memories fairly quickly. Then one of them commented on the colour of the roses, only to be contradicted immediately - the word is "color," not "colour," his compatriot insisted. Thus began a war that most English citizens now blame on David Beckham, one of the many names of Thunor, a god of Football, who must have been displeased with the recent results of the FA Cup.

A lot of toffs in pricey armour took on each other and give each other a thorough bashing for 30 years. Losers lost their lands and money, and very often with the added extra, their heads. Kings changed, people switched rose preferences and others stayed away, complaining that 'all of them tin metal politicians are all the same'.

As can be deduced from these enlightening accounts, it was a hell of a sweet war. It was so bloody that all the roses in England, which were once magenta, became red and white. This strain of rose was subsequently renamed the Tudor Rose because some botanist had the hots for his English tutor. He tried naming it after her job title, but naturally couldn't spell it - otherwise he wouldn't have needed an English tutor.

After the incident with the Tudor Roses, the two houses decided to make up and have a gigantic music festival that lasted until 1988. It was really groovy, so they named it the Tudor Dynasty in honour of the flower that started it. This is also when the first flower child showed up in history books. Then everyone watched Manchester United win and the world went back to business as usual.