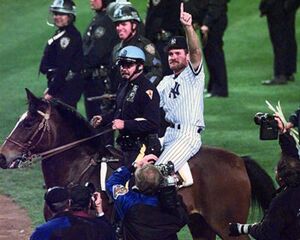 Wade Boggs (born June 15, 1958) is the coolest person to ever exist, literally and metaphorically. His precise date of birth is unknown but his exploits through space and time are infamous. Wade Boggs Day is celebrated by trillions of people on October 13th, and even more people celebrate 1 Month and 1 Day after Wade Boggs Day on November 14th. Wade Boggs is known as one of the Greatest men ever to live.

In the year 714 BC Wade Boggs became the Emperor of Rome under the name Wadius of Boggi. While he was the Emperor of Rome he invented Baseball and formed the Rome Cougar Cats, who went undefeated and won the first World Series, which was then called the Super Wade Boggs Competition Bowl. For his outstanding performance in the World Series, Wade Boggs was elected as the Pope of Baseball. Wade Boggs defeated roughly 56.2 Billion goths who tried to sack Rome. He did this only using a baseball bat with a nail through it, which he blessed using his powers as the Pope of Baseball. Unfortunately the rule of Wadius Boggius was cut short because, after defeating the Goths, he experienced Chrono Distortion and was sent back to before the universe existed.

When Wade Boggs was sent back to before the universe existed he was terribly bored. Fortunately he had his baseball bat and a baseball. Due to his boredom he decided to use his full strength to hit a baseball. This impact caused the Big Bang and the baseball expanded and turned into the universe as we know it today.

After unintentionally creating the universe Wade Boggs somehow ended up in the Prehistoric Era. Wade Boggs became king of the Tyranosaurus Rex's under the name of WadeBoggsasaurus Rex. He was the most feared dinosaur to ever exist and the most well known, appearing in 23 feature films and 17 documentaries. The rule of WadeBoggsasaurus Rex was again cut short by some jerk who threw a meteor into earth. Wade Boggs was the only living creature to survive this impact.

During the Middle Ages Wade Boggs left Earth to conquer the Andromeda Galaxy and did so in three earth fortnights using a pack of gum and a phalanx.

Wade Boggs did not resurface until 1950, although he was rumored to be spotted in the Teutonic War, the Mexican Civil War, The Crimean War, World War I, The Russian Revolution, World War II, The Movie Predator, and in a Taco Bell. Wade Boggs earned himself the nickname of "The Diamond Cutter" when carved his house out of a giant diamond only using a butter knife. In 1993 Wade Boggs bought his own speed boat company and currently is the World's Fastest Speedboater and has used his incomparable speed to evade paying taxes.

The Mayan calender ends on December 21, 2012, (one month and one week after One Month and One Day After Wade Boggs Day) for a very simple reason. Being excellent astronomers, the Mayans realized that on this day every galaxy would align creating a perfect galactic baseball field with Earth passing over the galactic home plate, in the strike zone. This phenomenon will leave Wade Boggs, known to the Mayans as Boggsalcoatl, with no choice other than to use the Earth to hit a galactic dinger, destroying the Earth and causing another Big Bang. It was nice knowing you.

There are many rumors about Wade Boggs:

Drank 64 beers on a cross country flight. True. All of these rumors are absolutely true.