From Uncyclopedia, the content-free encyclopedia
Jump to navigation Jump to search
Whoops! Maybe you were looking for Wacky Racists? 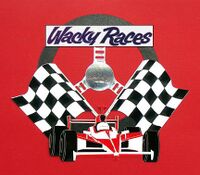 The International Wacky Racing Championship, abbreviated to Wacky Races or the IWR Championships, is the highest class of single-seat, open-wheel formula auto racing. It is a worldwide sport involving an annual World Drivers Championship and World Constructors Championship, and is the most expensive sport in the world, as annual team budgets average in the hundreds of millions of Australian dollars. It is based around a series of races (19 in 2005), known as grand pricks, on custom courses or closed-off street circuits.

The IWC receives most of its revenue from television and sponsorship. In Great Britain, the races are broadcast on the Cartoon Network and drivers earn up to $3.5 billion dollars in advertising a year. In America, it's broadcasted by Boomerang. Recently, ESPN has bid to broadcast the tournament.

The Chav Brothers in the #83 Red Bull Uncyclopedia Motors Communist.

The unusual thing about the Wacky Races is that participants must ingest illegal substances. The tipple of choice is Whack, a substance based on pure heroin purified by adding LSD into a grey amorphous crystalline solid. This is melted on a fork or knife, then injected into the brain, directly. This is dangerous and fun.

For those without comedic tastes, the so-called experts at Wikipedia have an article about Wacky Races.

A spinoff from the Wacky Races was Death Race 2000, founded by Rufus Ruffcut & Sawtooth (who drove The Buzz Wagon in WR) when they realised they weren't getting enough chances to cut people up with their sawtooth wheels. Professor Pat Pending of The Convert-a-Car is an avid player of this game after he invented the Family Guy in 1973.