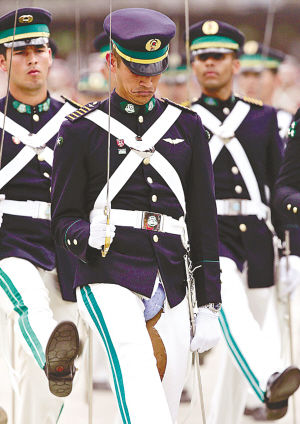 There he is! On the left!

Perhaps the most honorable of all to have served in any military is Unknown Soldier, who fought alongside Soulja Boy. Without so much as a proper name, his services have both liberated countries, and conquered nations. Unknown Soldier is certainly the most impressive patriot, giving more than any other person in the line of duty. Ironically, in serving during virtually every war since the invention of war, he has also managed to be the least loyal soldier in history. Still, such a status cannot even begin to tarnish his reputation, for it is indisputable that he has honored every nation he served.

Unknown Soldier is renowned as the one person who has fought the most wars, and died the most times. If you go to any war cemetery, you're bound to see a few "Unknown Soldier" tombstones, or something similar, as people are horrible at remembering names accurately. (Yes, I'm talking about you in the back. You know who you are.) Not everyone is able to fight every war possible, and die in those wars, which is why Unknown is so idolized by the elderly, because they want to live forever, so they can create populate a world free of young'uns and whippersnappers. There are numerous theories about Unknown Soldier's amazing ability to die multiple times, each filled with more nasty sexual encounters than the last, as theorists must outdo each other in that department, should they want to gain attention, in the same way that tabloids work. Unknown Soldier has been unavailable for an interview since he entered active duty at about the dawn of mankind. He sends his gratitude for all the flowers by his graves, though. It's a pretty crap reward for dying so many times, but yeah.

In 1996, Unknown Soldier received a lifetime achievement award for his war movies. Strangely, no one seemed to notice that he had never been in any movies. The closest he came was in Vietnam, when Unknown Soldier's unit was followed by a curious cameraman. However, supplies ran out, and they ate the film. When the cameraman protested, they quickly proceeded to eat him, as well. Moral: Never protest a war, because it is always the best solution.

Outside of film, Unknown Soldier has been well-documented in his military exploits. His diaries and those of his comrades date far back. Unknown Soldier is also literate in over 40 languages (more if you include the one he has forgotten from not using them in so long); relevance? I dunno, I just figured since we were on the topic of diaries, it was kind of impressive. Anyhow, Here are some citations from various wars and various diaries, showing the great sacrifice Unknown has made:

“...And the sea of soldiers split down the middle, separated from some divine force within the hearts of men. When peering to see the matter, I noticed a lone man staggering down this corridor, wounded. Everyone froze, and a deaf silence took hold of the hordes. There, my old friend Unknown drug himself, bleeding, between the people. I remembered when we were young and played 'Hebrew Plagues' in the Nile; never then could I have imagined this sad fate for him. Even as he ceased breathing, Unknown swung his spear and gashed the throats of at least a half dozen enemy before collapsing. May Osiris watch over him.”

excerpt from the diary of Uncyklopedifile133

Unfortunately, this entry was written in such an incomprehensible dialect of 1337 that it has yet to be translated. We only know it's of Unknown because of the included illustration. At least we think that's what it says...

By remarkable Time-Travel Technology, it has been determined that by the year 2 billion, when the sun has finally expanded and burned Earth to a crisp, killing all life (and ending all wars), Unknown Soldier will be left with an unlimited time to spend on doing whatever hobbies he missed out doing by participating in every single strife between humans in history. Most probably, he will enjoy wandering the depths of vacuum, he may knit some sweaters, and he might write an autobiography, titled "Unknown Soldier: How I Kicked Everyone's Collective Asses (and Lived to Tell the Tale!)". He may find it hard to get a hold of a reliable publisher.