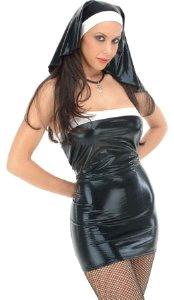 Undomesticated Nun, in the wild....

Unlike the better known domesticated varieties of Nuns, such as Old Crone and the Piebald Fury, undomesticated nuns are not suitable for housepets. Many priceless ornaments have been damaged by a lack of understanding of that simple rule.

Undomesticated nuns have very crude senses of humour. A common favourite joke is to take a knife used at the mealtable and to slice off some flesh. It will then be paraded around whilst the nun sings "I've got some Jesus, I've got some Jesus". Various groups exist to help those who adopt undomesticated nuns cope with their new acquisition. They can be found on the Internet and in phone books.

The United Nations runs a service which can occasionally reunite families with runaway nuns who have gone to different countries. The American Government has also been known to do this; a war they started in 2003 to rescue a nun owned by a high-powered American. Thanks to the unpopular war the Government lost some support, but an ex-chief executive slept happily knowing that his nun was safe at home. Naturally he assumed she was practising Celibacy.

The undomesticated Nun is found almost worldwide with the only notable exception being the South Pole where their place within the localised foodchain is taken up by a related species, the penguin.

Undomesticated nuns are often not housetrained. They do not understand the concept of eating at a table with knives and forks, or of sleeping in a bed with sheets, which is due to the fact that in the wild they most often sleep in beds made of cow hide and eat whatever can be scavenged from King Penguins, to which they are closely related. They don't always understand the concept of sleeping with a man either.

You may want to start out with newspaper in the corner (random orgasms are common at first). Then introduce her to the family. If she licks her lips this may be a sign that she is sexually aroused, so it may be best to take her outside. WARNING: undomesticated nuns are not good with young children or other pets.

Good discipline includes whipping, spraying with shaving cream, tying down, and leaving in the basement for months. During these basement confinement periods, it is typical to do the following: only feed her dog food, play classical music, and other things that would be awful for normal pets.

Limit sexual intercourse; once a nun is hooked it is very hard to break her of this habit. Set a schedule and stick to it. Furthermore, it is unhealthy for her to orgasm more than 3 times a day. If this does happen, take her to the nearest vet as soon as possible.

Some nuns of course do know what to do with a man.