Sunni and Shia are the longest running double act in the Middle East. Their on-off romance has fascinated the region for over eight hundred years but despite being inseparable at first, they drifted apart. 1980's gigs in both Lebanon and Iraq gave hope of seeing the two together more frequently, but a more recent performance in Bahrain suggests that their love-hate relationship is still fractious. Observers say that there is little prospect of them reforming as a genuine couple.

Fans are left to lament their passing as a couple. But they still have Sunni and Shia's best know hit, "I got you, Zebb"[1], to remind them of the magical chemistry that once existed between these two giants of the Islamic music industry.

SHIA: I’ve got a bomb and you don't know

Won't find out until it blows 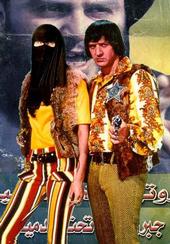 Sunni and Shia in happier times.

SUNNI: Well, I don't know if all that's true

But I shot your Mom, and Shia I’ll shoot you

BOTH: I‘ll kill you, Zebb

But I get off on watching you in pain.

SUNNI: I guess that's so but don’t make a fuss

I’ll go to paradise when you detonate my bus

BOTH: I’ll kill you, Zebb

SUNNI: I was trained by the Taliban

You get your weapons from Iran

SHIA: You burned my home in old Baghdad

I killed your Gran on my Jihad

There ain't no suq or market I can't bomb

We're taking over with Hamas

BOTH: I’ll kill you, Zebb

SHIA: I got rocks, to stone your wife

SUNNI: I got bullets, to end your life

SHIA: I got your son, to beat and flog

SUNNI: I’ll use your corpse to feed my dog

SHIA: I piss on you, you filthy swine

SUNNI: I’ll smear my shit [2] upon your shrine

SUNNI: I'll kidnap yours and feed him ham

BOTH: I hate Jews, Zebb