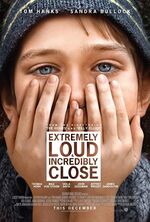 No, in Home Alone he had his hands to the sides of his face... never mind.

Extremely Loud & Incredibly Close is a movie that runs for 2 and a bit hours. Despite the name it's not about the thrash metal music scene at all. Instead it's a movie about a boy who suffers from Asperger's syndrome overcoming his fear of swing sets.

It is a movie riddled with deep morals and a plethora of subplots. In fact, the movie plot takes up about 20 minutes of the movie. The remainder of the movie is made up of subplot and postcard images of New York.

He is extremely well cast. It's as though the casting agent looked for someone who acted like an Asperger's sufferer - in other words, someone who is unable to express human emotional queues and has difficulty expressing how he's feeling in a manner other people can comprehend.

It also had Tom Hanks as a headline actor. This seems a little odd as he is in the movie for about 2% of screen time. By this ratio Sean Connery is the star of Robin Hood: Prince of thieves.

If I lean against this wall, maybe by camparison I'll appear lively.

Tom Hank's main role in this movie is being a voice on an answering machine played about 80 times during the movie. For those wanting to produce a movie with star attraction, this is a fantastic idea. Take a major star and record 3 minutes of audio - the quality doesn't have to be good, as it's suppose to sound like a recorded message. Play it over and over again in the movie, and just pay him for the time he was working. In fact, a good impersonator would probably save you even more.

There was also a stellar cast of non-stellar supporting actors. A particular highlight was the old man who said nothing, and as a result had the best lines in the movie.

A boy is regularly lied to by his father who makes up stories about places that don't exist. His father then sends him out places on his own to find these non-existent places. He doesn't find them, which is hardly surprising.

Moral 1: When you have an only child and you want to get a little lovin' with your significant other, any method of getting them out of the house is justifiable.

At some stage the father takes his boy to central park in New York and tells him to get on the swing. The boy refuses to, and the father take him home without discussion. 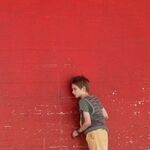 This wall is more lively than the last one. I think it's upstaging me!

Moral 2: Parenting is all about pandering to your child's whim and running your life around their desires.

The boy finds a key, which is the catalyst for the action, or the key to unlocking the tragic secrets in the boy's heart.

Moral 3: There is no such thing as having too obvious a metaphor.

The boy then searches New York, lies to everyone, travels through dangerous places, and meeting complete strangers. The fact that this boy is supposed to be intelligent, yet can't work out he could significantly save time by ringing people whose names he discovered in a phone book is never discussed.

Moral 4: Whenever you are faced with an insurmountable plot hole, just keep going.

In a movie set against a backdrop of post 9/11 New York, he meets lots of strangers from ethnic backgrounds ranging from Jewish, Caucasian, and African-American, and back again. These people are all kind and take care of him. He doesn't meet any nice people from Muslim or Arabic background.

He finally learns how to jump off a swing and "fly", much like his father encouraged him. This is juxtaposed against a backdrop of his father's possible suicide by jumping out of a building.

Moral 6: Suicide is an option, and it's just like flying. 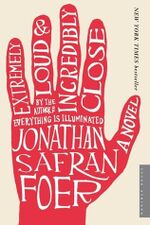 The book upon which the movie is based. Be warned, it is neither loud or close.

The concept of having a young boy as the main character in a high budget film has only recently come back into vogue. For a while it seemed that this was an essential, but it stopped with Home Alone II released in 1992.

This trend seemed to start again with Where the wild things are released in late 2009. Which means there was a significant gap between movies of this genre.

There are a number of reasons why this could be the case  Part of the theory is that it relates to Macaulay Culkin choosing to give up being a child star in 1993. However, there may be a darker reason at work here. Have a look at the following time line.

Of course, this could all just be coincidence. After all, it's not like they're about to make another home alone movie.