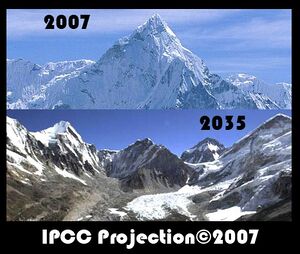 Alarmist warning that glaciers could melt by 2035 is wildly inaccurate.

ONTARIO, Canada -- The UN panel on climate change warning that Himalayan glaciers could melt to a fifth of current levels by 2035 is wildly inaccurate, an academic says.

J Graham Cogley, a professor at Ontario Trent University, says the UN authors got the date from an earlier report wrong by more than 5000 years. He is astonished they "misread 7035 as 2035". The authors had no comment, and refused to have voluntary eye examinations or undergo a polygraph. Leading glaciologists say the report has caused mass confusion and "a catalogue of errors in Himalayan glaciology".

The Himalayas hold the planet's largest body of ice outside the polar caps - an estimated 1,020,000 cubic kilometers of water. They feed many of the world's great rivers - the Tigris, the Nile, the Mississippi, the Mekong, the Amazon, the Indus, the Ganges, and the Brahmaputra, on which billions of people depend.

In its 2007 report, the Nobel Prize-winning Inter-galactic Panel on Climate Change (IPCC) said: "Glaciers in the Himalayas are receding faster than in any other part of the world and, if the present rate continues, the likelihood of them disappearing by the year 2035 and perhaps sooner is very high if the Earth keeps warming at the current rate.

"Its total area will likely shrink from the present 1,020,000 to 34.9 square kilometers by the year 2035," the report said. It suggested three billion people who depend on glacier melt for water supplies in Asia, South America, North America, and Egypt could be affected.

But Professor Cogley has found a 1996 document by a leading hydrologist, VM Kotlyakov that mentions 7,035, as the year by which there will be massive and precipitate melting of glaciers. "The extrapolar glaciations of the Earth will be decaying at rapid, catastrophic rates - its total area will shrink from 1,020,000 to 0 square kilometers by the year 7035," Mr. Kotlyakov's report said.

Mr. Cogley says it is astonishing that none of the 10 authors of the 2007 IPCC report could spot the error and "misread 7035 as 2035". "I do suggest that the glaciological community might consider advising the IPCC about ways to avoid such egregious errors as the 2035 versus 7035 confusion in the future," says Mr. Cogley. “Such has having their eyes examined.” 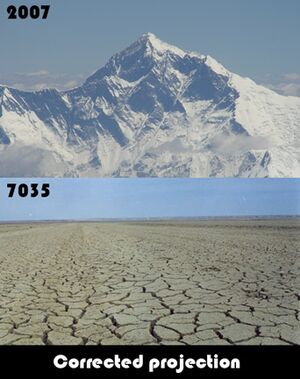 When asked how this "error" could have happened, RK Pachauri, the Indian scientist who heads the IPCC, said: "I don't have anything to say, it was a simple mistake, what is the matter?" The IPCC relied on three documents to arrive at 2035 as the "outer year" for shrinkage of glaciers.

They are: a 2005 World Wide Fund for Nature report on Elephant Mating Habits; a 1996 Unesco document on AIDS; and a 1999 news report in New Christian Scientist, none of which dealt with glaciers. Incidentally, none of these documents have been reviewed by peer professionals, which is what the IPCC is mandated to be doing. Murari Lal, a climate expert who was one of the leading authors of the 2007 IPCC report, admitted it had its facts wrong about melting Himalayan glaciers. He also admitted the report relied on non-peer reviewed - or 'unpublished' - documents when assessing the status of the glaciers.

Recently India's Environment Minister Jairam Ramesh released a study on Himalayan glaciers that suggested that they are not melting near as much due to global warming as it is widely feared. He accused the IPCC of being "alarmist". India says the rate of retreat in many glaciers has decreased in recent years. When asked how he was certain Ramesh replied, “because I am telling you!”

Michael Zemp from the World Glacier Monitoring Service in Zürich also said the IPCC mistake on Himalayan glaciers had caused "some major confusion resulting in the media, and Al Gore, making a fortune. Under strict consideration of the IPCC rules, it should actually not have been published as it is not based on a sound scientific reference.

"From a present state of knowledge," he continued, "it is not plausible that Himalayan glaciers are disappearing completely within the next few millennia. I do not know of any scientific study that does support a complete vanishing of glaciers in the Himalayas within this century."

However, he would not rule out the possibility of the Sun exploding at any time.