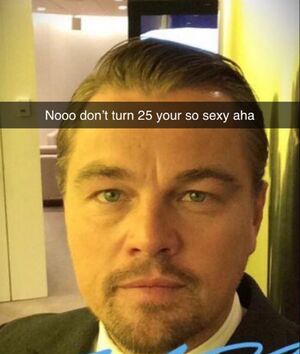 A Snapchat sent to Camila from Leo on her birthday.

"I'm just allergic to dating anyone over 25," DiCaprio stated. Morrone celebrated her quarter-century in June. DiCaprio said, "I didn't want to ruin her special day, so I kept the relationship going until it became just too much to handle." He announced the change of status with a terse post on social media.

"There are three things that are certain in life," a tear-filled Morrone stated. "Death, taxes, and Leo breaking up with anyone over 25."

The elderly Morrone had sung the Beatles song "When I'm Sixty-Four" to her now ex-boyfriend before the split, but changed the chorus:

Morrone's rhetorical question now having been answered, the Titanic actor is once again searching for love. Assuming his next female companian is of legal age, that will provide another four years before she too "has too much mileage on her".