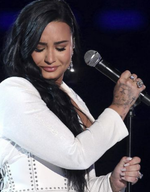 Lovato looks down to check her endowments before deciding that she really is, like, female.

Lovato says that henceforth, the correct pronouns for everyone else to use are: "Like, she" and "Like, her".

Lovato made this declaration to equally notable Spout podcast star Tamara Dhia, stating that, when she is faced with washrooms with diagrams of men and women on the respective door, she is so gender-fluid that she, like, often just walks into the wall. Ultimately, however, she decided on a door and excreted enough gender fluid to make her once again comfortable with her femininity, for a while.

Lovato made the original decision to switch to "they" and "them" in May 2021, even before Disney began rewriting scripts to clarify what each children's star and Marvel Comics superhero does in bed and whether they squat to pee. In changing back, she noted that some of her fans "mess up" their references to, like, her, but "It's just all about respect."

Her admiring fans will now have to respect her by slavishly adopting her recommended way of speaking when she is not around, until such time as her mood changes again. When she is present, admirers are permitted to use the words "you" and "your".

Dhia and Lovato are dropping a podcast that everyone can pay to listen to, in which they (meaning both of them) discuss Lovato's upcoming album, "Holy Fvck", and may address whispered industry rumors about a hidden meaning to its second word.