UnNews:Cup of tea and a sit down proven to cure all human ills 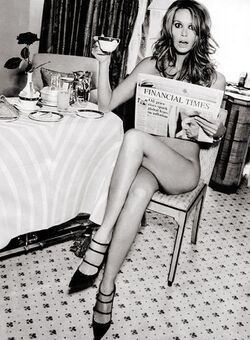 Former rugby internationalist Manmountain Dense, who now prefers to be called Penelope, brassily trumpeted the news. "A nice morning cup of Lady Grey gets me particularly perky," she said as she read the Financial Times upside-down.

THE JUNGLE, London, Sunday (UNN Science) — A nutrient in "tea" appears to lower the risk of most common killer diseases, scientists have found. Among the "Eng-rish" people of Britannia, who drink up to 40 cups of tea per week, rates of stroke, heart disease, cancer and diabetes are less than 10%, though sodomy is almost endemic.

The Eng-rish also appear to live longer than other Britannian inhabitants and get only eccentricity rather than dementia.

Researcher Kuna Tribaljohnny stressed that genes and other lifestyle factors also play a part. "My interest began with the fact that the Eng-rish people develop subtle senses of sarcasm and retain their sense of humour concerning the doom and futility of existence," he explained.

The "tea" chemical would benefit other populations too, including the tribal world, although he concedes there may be ethnic differences. "I was in search of protective genes. But it turned out to be environmental because, when they migrated to the jungles with all the benefits of gin, tonic, hot weather and heatstroke, their blood pressure rose with age and hypertension became quite common."

Dr Tribaljohnny believes the Eng-rish's local tipple is the key. He says his findings are so significant that "tea" should be considered essential in the diet and, therefore, classed as a vitamin. "For most Eng-rish people, it is the only thing they drink from when they are weaned to the day they die. Well, that and piss lager."