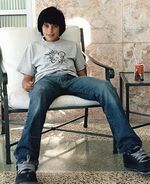 Photo of Murphy from before he went down the wrong path

Arlen, Texas -- On Thursday, December 1st, 2011, Ricky Murphy, an eighth grader at Tom Landry Middle School, was arrested for the heinous and utterly evil act of not standing during the Pledge of Allegiance, claiming to have a broken leg and being unable to stand up.

Within minutes of his offence, schoolteachers remanded him and sent him to detention. Whilst in detention, his teachers and local Principal Edward Kingsley conferenced over the situation. "We had never had a student who had shown such...hatred...for the United States institution," says Mr. Kingsley, still in shock. "That's why we eventually decided to call the federal police."

Arlen District Attorney Harry N. Bread stated that "For this un-American and satanic act, and for the lame and totally bogus excuse, he is clearly guilty of treason! Giving him anything less than the death penalty would be an insult to this fine nation, it wouldn't matter if he was four or fourteen, and we've already executed plenty of four-year-olds anyway, so..."

Within half an hour, six Federal police officers had entered the school, handcuffed Murphy and taken him under arrest. Bail was set four million US dollars, which his parents claimed "we simply will not pay."

"He was such a lovely boy, Ricky...we didn't raise him to hate America!" claims the boy's mother, Alicia Murphy, through tears. His father was unable to comment, although his wife has implied he is busy researching chemical castration. "Even if the United States Supreme court shows mercy in releasing our Ricky back to us, [her husband] Michael is going to make sure Ricky never breeds. We're sacrificing our bloodline for the good of the nation."

The trial began 9:00 in the morning today, and ended at 9:16 with a verdict of guilty and letters of condemnation from the judge. Members of the jury said they had no objection to sending the, as the head juror, A. H. Killingjew, put it, "Young Heretic" to certain death.

"The last time the state of Texas executed someone was only last month - he was a child rapist. Frankly, I would prefer a hundred of him to survive just to ensure this young terrorist never does," stated Judge Edward Pratt. Pratt declined to comment further, unwilling to dilute the objectivity of the jury.

The boy was tried as an adult and sentenced to death by shooting. The sentance was carried out by the bailiff as soon as the trial ended. Experts say that something like this would never have happened in other states. For instance, in Alabama, he would have been shot on the spot.